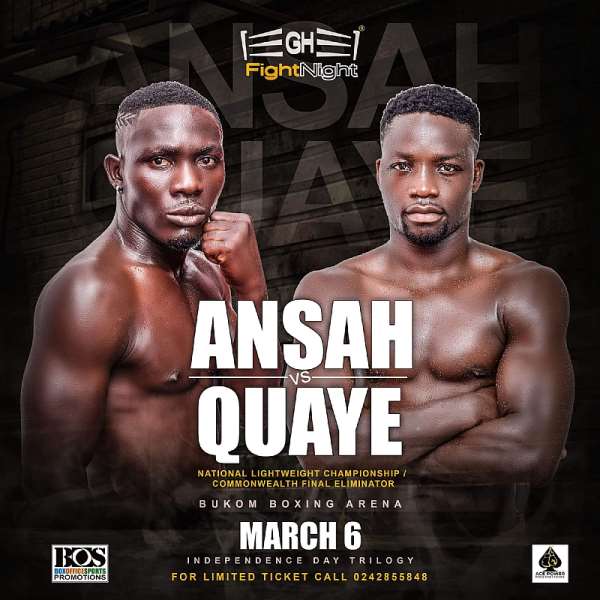 The main bout on the first promotion of the year is the third fight (Trilogy) between Michael Ansah aka One Bullet and Sherif Quaye aka One Time. Both boxers have won once and this is the decider

There was a scheduled IBF Africa super lightweight championship between Ghana’s Robert ‘Stopper’ Quaye and Prince Dlomo of South Africa, but it has been called off, however, the unbeaten Quaye with 18 wins will face Ghanaian Richard Amenfu in a 10-round contest.

In other supporting bouts on the night, the national featherweight championship clash involving undefeated champion John Laryea and Kamarudeen Boyefio will come off.

Holy Dorgbetor, the new kid on the block will face Edward Kambassa in a featherweight contest while Daniel Aduku meets Naimou Aziz Samson in a super welterweight contest.

Stylish amazing national champion, Theophilus Tetteh will engage Musa Appiah at super bantamweight, while Daniel Gorsh and debutant Michael Abban are billed to fight yet to be announced, opponents.

Addressing the media on the promotion, Alex Ntiamoah - Boakye said all Covid – 19 Protocols will be observed and all the boxers and officials will be tested.

He hinted that it will be shown exclusively on Ace Power TV with seats for only 300 guests.

He appealed to sponsors to come on board to support the show.