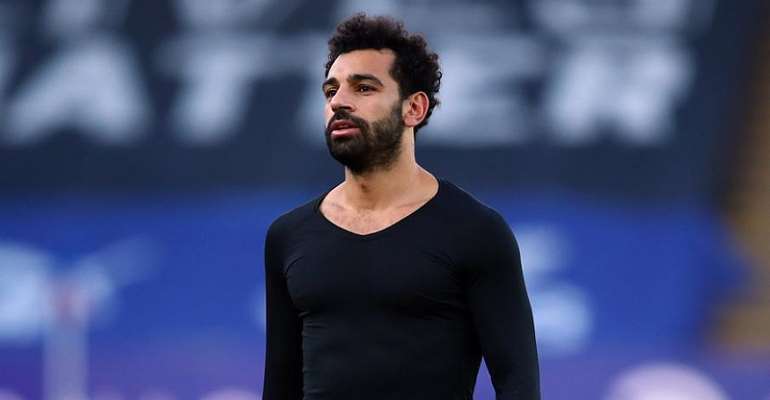 Egyptian Mohamed Salah shot to the top of the Premier League Golden Boot race by bagging a brace at the weekend as Liverpool demolished Crystal Palace 7-0.

The 28-year-old sharpshooter has averaged a goal a game since the league season kicked off, netting 13 times in 13 outings for the defending champions.

Dominic Calvert-Lewin (Everton), Son Heung-min (Tottenham) and Jamie Vardy (Leicester) are hot on the heels of Salah with 11 goals each.

Here, AFP Sport rounds up the performances of African stars in the major European leagues.

SADIO MANE, MOHAMED SALAH (Liverpool)
Mane and Salah shone as Liverpool smashed Palace 7-0 to take command of the Premier League title race. After nine games without a goal, Mane ended his longest drought since joining Liverpool with an excellent turn and shot into the bottom corner to give the visitors a 2-0 lead. The Senegalese was unhappy to be replaced by Salah 10 minutes into the second half. The Egyptian produced contrasting finishes late on as he stooped to head home after a corner and then curled a brilliant shot into the top corner.

NICOLAS PEPE (Arsenal)
In the absence of Gabon talisman Pierre-Emerick Aubameyang through injury, Pepe took responsibility from the penalty spot to score Arsenal's goal in another damaging 2-1 defeat for the Gunners at Everton. Despite scoring for just the second time in the league this season, Pepe did little to impress Mikel Arteta as the Ivorian was replaced 19 minutes from time with his side desperately seeking an equaliser.

BERTRAND TRAORE (Aston Villa)
Traore scored his first Premier League goal since joining Villa from Lyon and teed up Anwar el Ghazi's opener as their fine season continued with a 3-0 win at struggling West Brom. The Burkina Faso international coolly slotted Jack Grealish's pass into the far corner for Villa's second goal six minutes from time as they rose to ninth with games in hand on all the sides above them.

DJENE DAKONAM (Getafe)
The Togo defender put in an assured performance as he captained his Getafe side to a crucial 2-0 win at Cadiz. The win moved Dakonam's side out of the La Liga relegation zone and into 11th place.

FRANCK KESSIE (AC Milan)
Ivorian Kessie will miss Serie A leaders AC Milan's final game of the year against Lazio on Wednesday after being yellow-carded in their 2-1 win over Sassuolo.

SIMY (Crotone)
Nigerian forward Simy pulled a goal back for rock bottom Crotone from the penalty spot just before the break, but the promoted side fell 3-1 at Sampdoria, their ninth defeat in 13 games.

TAIWO AWONIYI (Union Berlin)
The Liverpool loanee slipped his marker to give Union Berlin the lead in a 2-1 home win against Borussia Dortmund, whose title hopes suffered a fresh dent. Having also scored in the 2-2 draw with Stuttgart the previous weekend, the 23-year-old Nigeria international claimed his fourth goal in six games for Union with a powerful header.

SALIF SANE (Schalke 04)
The Senegal centre-back was at fault when Bielefeld captain Fabian Klos outleapt him from a cross and headed what proved to be the winning goal in Schalke's 1-0 home defeat, which extended their winless streak to 29 games. Sane, 30, has a contract until June 2022 but could well be playing second division football next season with Schalke currently bottom of the league and just two matches short of the league record for the longest winless run, held by Tasmania Berlin since 1965/66.

EDMOND TAPSOBA (Bayer Leverkusen)
The Burkina Faso defender looked crestfallen at the final whistle after Robert Lewandowski's last-gasp goal sealed a 2-1 win at Leverkusen, which took Bayern Munich to the top of the Bundesliga. After Patrik Schick gave Leverkusen an early lead, Tapsoba was at fault for Lewandowski's first goal just before half-time after losing possession.

TINO KADEWERE (Lyon)
Zimbabwe attacker Kadewere starred as a Lyon side branded "magnificent" by coach Rudi Garcia briefly topped Ligue 1 on Saturday. The 24-year-old scored and set up Cameroon's Karl Toko Ekambi in a 4-1 win at Nice, and although Lille retook top spot on Sunday night, Lyon are now unbeaten in 13 matches in the French top flight and look genuine challengers to Paris Saint-Germain's crown.

KARL TOKO EKAMBI (Lyon)
Forward Toko Ekambi has now scored eight Ligue 1 goals in 14 appearances this season after gobbling up Kadewere's squared pass into the box in the 63rd minute of Lyon's demolition of Nice. The 28-year-old is just three strikes behind the league's leading marksman Kylian Mbappe in his first season as a permanent Lyon signing.