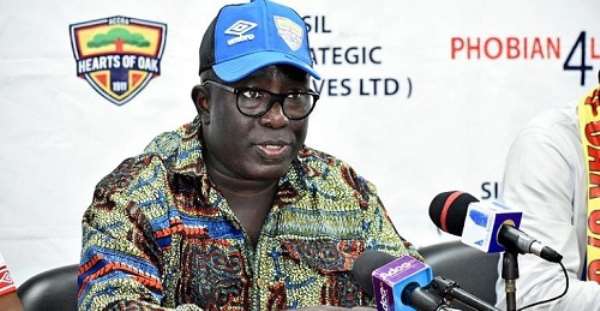 Ghana Premier League side, Accra Hearts of Oak have debunked media reports claiming Chief Executive Officer [CEO] of the club, Frederick Moore has left his role at the club.

Mr Moore for the past weeks has been on a sick leave as the club announced.

However, on Sunday, November 29, reports emerged that Mr Moore has resigned from his duties at the club.

But according to Kwame Opare Addo, who is the Communications Director of the club in an interview with Accra based Vision 1 Radio refuted the media report and insisted Mr Moore is still in charge as the CEO of the club.

"Mr Frederick Moore is here at the office with me now so disregard all rumours about his resignation," he said.

"He only went on a sick leave and he is back working."

Opare Addo also said Kosta Papic who arrived in teh country on Sunday will not replace Edward Nii Odoom as the head coach of the club.

The Serbian trainer according to sources close to the club will be named as the new Technical Director of the club.

"Coach Edward Nii Odoom is still at post and will not be replaced by Kosta Papić," he said.

Papic was at the Accra Sports Stadium on Sunday as Hearts of Oak suffered their first defeat against Inter Allies in the matchday 3 fixture.

The Phobians are currently occupying the button of the league log.

There is possibility of a lockdown, other restrictions – Opp...
34 minutes ago