La Liga: Hazard Limps Off For Real Madrid Against Alaves 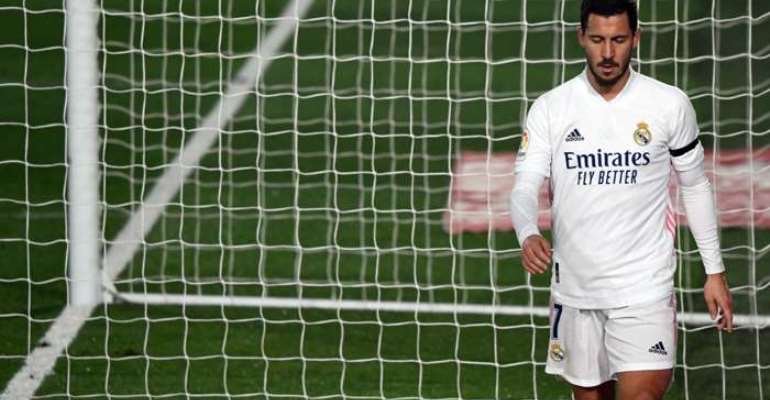 Eden Hazard was taken off in the first half of Real Madrid's match against Alaves on Saturday with an apparent injury.

The Belgian winger lasted less than 30 minutes before limping off the field with Zinedine Zidane's side 1-0 down to the visitors.

Hazard, who was making just his third appearance in La Liga this season, was replaced by Rodrygo.

The 29-year-old's campaign has been heavily disrupted by injuries, having missed the start of the campaign due to a muscle issue.

He played for the first time in 2020-21 when he came off the bench in the Champions League draw with Borussia Monchengladbach in late October and returned to the starting XI four days later in the league match against Huesca, scoring the first goal as they ran out 4-1 winners.

A few days later, however, he tested positive for Covid-19 and had to be sidelined for a short period.

Hazard was in action again last week when he started in the 1-1 draw against Villarreal in the Spanish top-flight.

He then featured in the 2-0 win at Inter in the Champions League in midweek, in which he opened the scoring after just seven minutes.

Los Blancos were fourth in the table heading into Saturday's encounter at the Santiago Bernabeu, six points adrift of leaders Real Sociedad and Atletico Madrid.

The hosts fell behind against Alaves just five minutes into the clash when ex-Arsenal and West Ham attacker Lucas Perez converted a penalty.

Hazard had a chance to level the score later in the half when he collected the ball near the halfway line and drove towards goal. The former Chelsea star's effort was denied by Alaves goalkeeper Pacheco, however.

Madrid would go down two goals early in the second half when a wayward Thibaut Courtois pass was collected by Joselu 25 yards out and deposited into an empty goal.

Hazard has made 28 appearances in all competitions for Madrid since he joined from Chelsea in the summer of 2019.

Despite his struggles, Belgium manager Roberto Martinez has backed him to get back to his best next year.

"He has had a really complicated year. I am convinced that 2021 will be a fabulous year for Eden Hazard, and also the national team," he said.