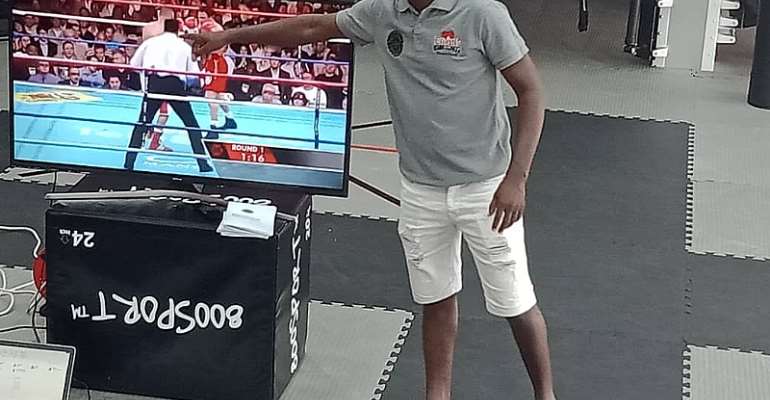 WABA's "Top Wigs" in attendance included the President and Chair of the Board Hon. Ky Col. Onesmo Alfred McBride Ngowi from Tanzania, Director of Human Resources Management (DHRM) Irene Joseph Magebo from Tanzania, Commissioner to the Middle East Persian and Samoa Zack Taumafai from Samoa/Australia and Commissioner to the Middle East, Persian Gulf and Iran Payam Honari from Iran/Use.

Others were WABA Commissioners to French-speaking European countries Didier Le Borgne from France who was also a trainer of Kickboxing and Muaythai, Commissioner to Malawi Agnes Mtimakunena from Malawi and trainer of the MMA Lorenzo Borgomeo from Italy.

Roger Barnor, an expert of ring officials training captured both interests and minds of participants with his two hour's sophisticated presentation which quenched the thirst of boxing stakeholders in attendance.

Barnor, who doubles as the international referee certified by several sanction bodies and the Vice-Chairperson of the Ring Officials Committee of the Association of Professional Boxing Association (APBC) took participants through stages of ring officials.

Buoyed by tremendous enthusiasm from attending participants and the state of the art of the Ringside Gym Global's facilities, Barnor delivered perhaps one of the best seminars in recent times.

While articulating both roles of referee and judges with their responsibilities inside the ring (referees) and at ringside (judges), the Ghanaian seem to possess immense knowledge as boxing expert whose cardinal objective is to promote careers and safety of the boxers.

"Boxing being the sweet science should provide avenues to boxers to further their fighting careers while at the same time protects and sustains their lives," said Roger Barnor.

Participants enjoyed array levels of pedagogical training on how to best handle boxers and control surging crowds in boxing venues.

He used videos to illustrate his mental capacity of ring knowledge as they prepare for a date in the ring. He alluded that attitude, honest, fairness and impartiality provides sustainable careers to boxers.

"A good ring official should put his feet in boxers' boots so that he can render an impartial decision," he emphasized.

The Dubai's ring officials training seminar is organized by the Ringside Gym Global of Dubai and Coordinated by the World Africa Boxing Association (WABA).

The Basic stage training seminar will to be followed by the "Standard" and "Advanced" levels in April and November 2021 respectively.