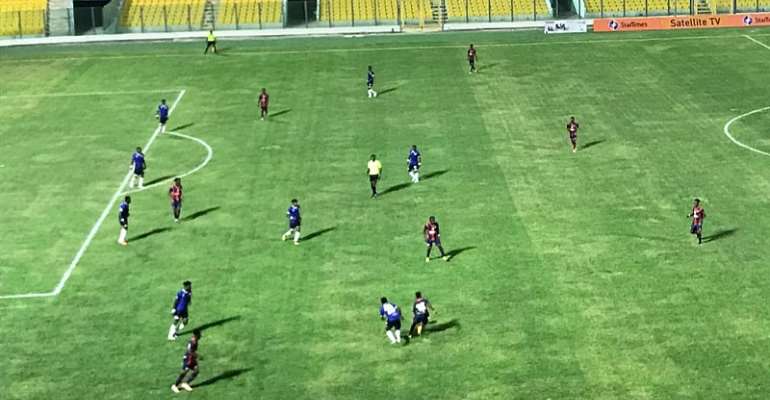 Legon Cities FC and Berekum Chelsea drew 1-1 at the Accra Sports Stadium on Saturday evening in the season opener of the 2020/2021 Ghana Premier League season.

The host displayed good form in the first 10 minutes of play but failed to make their dominance count.

Have settled into the game, Berekum Chelsea took the lead via a goal from the penalty spot in the 22nd minute.

New captain Stephen Amankona stepped up after the spot-kick was awarded and sent Legon Cities FC goalkeeper Fatau Dauda the wrong way to shoot his team into the lead.

After going behind, Legon Cities FC played with more purpose in a bid to find the back of the bet to get back into the game.

Fortunately for the Royals, their effort will pay off after the half-hour mark when they were awarded a penalty kick.

New signing Jonah Attuquaye accepted the responsibility from 12-years to score against his formal club to restore parity for Legon Cities FC.

Although the second half saw both teams create some decent goal-scoring opportunities, neither side could find the back of the net, forcing the game to end 1-1 at the end of the 90 minutes.

Encroachers on KNUST lands will face my wrath — Otumfuo war...
49 minutes ago