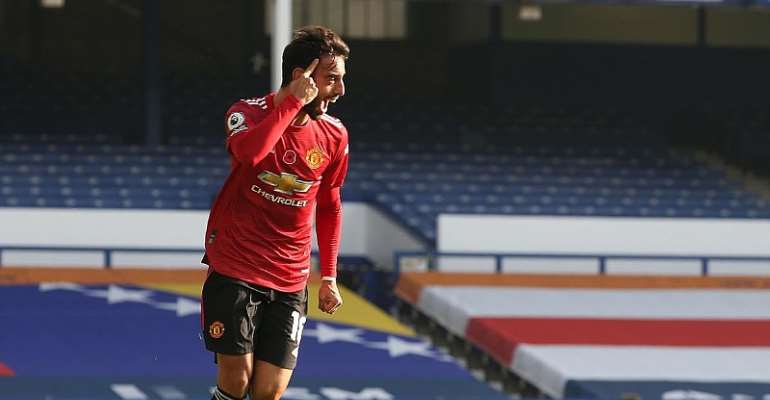 Manchester United arrested a run of back-to-back defeats by coming from a goal behind to claim a creditable 3-1 Premier League win over Everton at Goodison Park.

The hosts took the lead through Bernard but were soon pegged back by Bruno Fernandes' brace and Edinson Cavani's late winner, which were enough to secure a win which lifts the pressure on United boss Ole Gunnar Solskjaer.

It was Everton who made the brighter start to the game and were duly rewarded when a long ball from Pickford fell kindly to Bernard off Victor Lindelof's head. The Brazilian had a dig and drove it past De Gea at the keeper's near post.

But United responded well, with Rashford stabbing one wide before Luke Shaw picked out Fernandes, who headed past Pickford expertly.

Fernandes was involved with the second too, receiving the ball from Rashford and clipping it towards the England forward at the far post. Rashford claimed that his header had made its way into the net off the post but there was some confusion as to whether he had made contact.

VAR controversy struck in the early period of the second half, with Maguire denied a penalty after being cleaned out by Pickford, before the England defender was perhaps lucky not to give away a spot kick himself for a lunge on Digne, who had previously been flagged offside.

Everton dominated possession throughout the second half but failed to create any real chances, and Rashford could have had the visitors even further ahead after beating the offside trap, only to find Pickford's legs.

Throughout the second half, Everton were unable to trouble David de Gea and the United defence did enough to repel them, with Edinson Cavani netting a late goal on the break to end the contest.