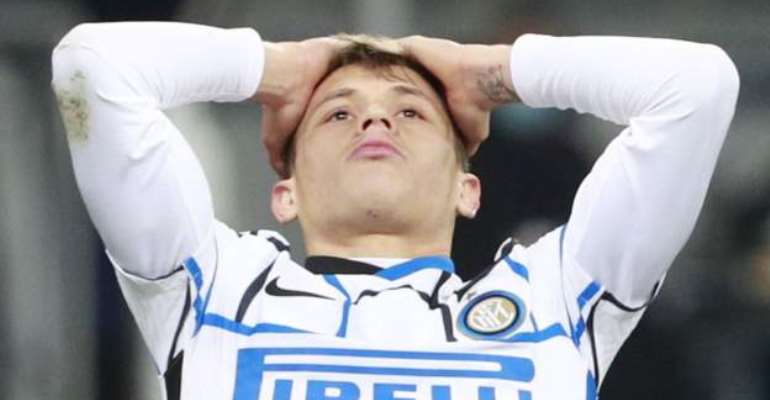 Shakhtar Donetsk remained top of Champions League Group B as they held on for a goalless draw against a wasteful Inter Milan side in Kyiv.

Inter twice hit the crossbar - Nicolo Barella from 18 yards out and then through Romelu Lukaku, whose powerful free-kick was tipped on to the bar by 19-year-old goalkeeper Anatolii Trubin.

Lautaro Martinez also shot wide from six yards after Trubin had parried Marcelo Brozovic's strike as Shakhtar followed up their shock 3-2 win at Real Madrid with another fine result.

Inter have not reached the knockout stages of the Champions League since 2011-12 and now have two points from two games.

But boss Antonio Conte will be wondering how his side did not gain the victory against a Shakhtar side who only had one shot on target.

Shakhtar caused a huge upset last week as the Ukrainians, without eight players because of Covid-19, scored three times in the opening 42 minutes on their way to victory against Spanish champions Real.

Manager Luis Castro rewarded his young Shakhtar team by naming the same starting 11, with eight players aged 21 or under.

However, Inter dominated throughout. Lukaku was one-on-one with Trubin but the goalkeeper blocked his effort, before Barella's rebound shot hit the woodwork.

Ex-Manchester United striker Lukaku, who had scored in each of his previous nine European games for Inter, then headed wide from a corner and later had a free-kick superbly saved by the impressive Trubin.

The teenager did well to parry Brozovic's effort but was fortunate that Martinez could not finish the rebound with the goal unguarded as Shakhtar held on for a draw.

Inter play away at Real Madrid next Tuesday, with Shakhtar at home to Borussia Monchengladbach before the reverse fixtures three weeks later.