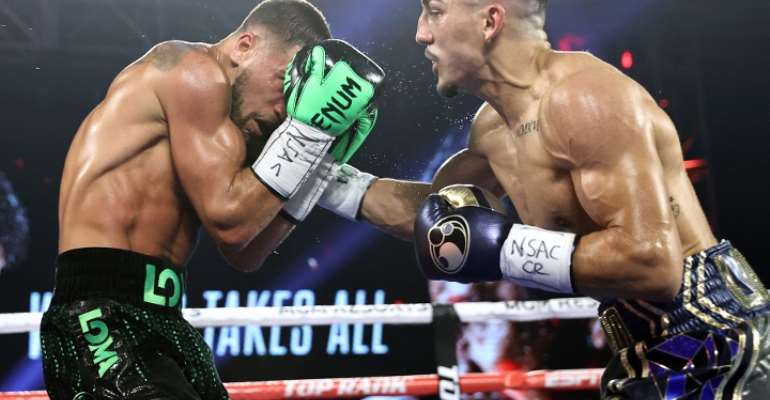 Vasily Lomachenko can forget about facing his conqueror Teofimo Lopez in an immediate rematch after losing to him last Saturday night at the MGM Grand in Las Vegas. Lomachenko came up well short on the scorecards, losing 119-109, 118-110, and 116-112.

In the aftermath, Lomachenko wasn’t too pleased, saying he disagreed with the judges’ scores, and he felt that he was winning at the end.

Lopez (16-0, 12 KOs), who is now the undisputed lightweight champion in holding all four titles at 135, says Lomachenko (14-2, 10 KOs) didn’t include a rematch clause in the contract for last night’s fight.

Team Lomachenko thought they were going to beat Teofimo, and that didn’t happen, and now they got to live with it. Was it arrogance on Lomachenko and his team’s part not to include a rematch clause in the fight? Perhaps.

Loma is used to winning, and it was assumed that the young 23-year-old upstart Teofimo would fall by the wayside like the others.

IBF/WBA/WBC/WBO lightweight champion Teofimo says Lomachenko can eat the loss because he’s moving on with his career towards bigger and better things.

One fight that Teofimo is interested in for 2021 is to take on the winner of the 140-pound unification match between champions Josh Taylor and Jose Ramirez.

If Teofimo faces the winner of the Taylor-Ramirez clash, he can potentially become the undisputed 140-pound champion.

No one has ever done that in boxing in consecutive years in because the undisputed champion in two weight classes, and Teofimo would become the new superstar overnight in the sport.

With Canelo Alvarez’s career sidelined with litigation and further hurt by his soft match-making, Teofimo could take over as the new #1 star in the United States.

“For what? I beat him and I did everything I had to beat him,” Teofimo said at the post-fight news conference when asked if he’ll give Lomachenko a rematch.

“If anything, it’ll happen again with the same thing. There was no rematch clause for a reason. They had it. Now I can talk my s***.

“They [Team Lomachenko] didn’t have a rematch clause for a rematch, and they gave me a contract pretty much on the side. ‘If you lose, this is what you’re going to get for your next fights,’ which pretty much was predicting that I was going to lose.

“So it’s fine. Now they got to eat it up, suck it up, and now it’s time for us to take over and move forward. That’s it. I told y’all, ‘Out with the old and in with the new,'” Lopez said about him beating the ageing Lomachenko.

So there it is. No rematch for Lomachenko and he’s going to have to live with another defeat just as he did after his loss to Orlando Salido in 2014. Lomachenko wanted a rematch with Salido, but it failed to happen.

It’s probably a good idea for Lomachenko NOT to tangle with Lopez a second time because there’s not much he could do to turn the fight around. As we saw from watching last night’s fight, Lomachenko is too small, weak, and old to beat Teofimo.

In a second fight, Lomachenko could get knocked out by Teofimo if he took more chances and fought with more aggression. We saw what happened to Lomachenko when he took the fight to Teofimo late in the contest in the championship rounds.

Teofimo hurt Lomachenko with a body shot in the 10th, which the referee Russell Mora mistakenly ruled as a low blow. Lomachenko tried to play matador by standing on his tiptoes to avoid the body shot from Lopez, and it nailed him slightly low. It was on the beltline.

It wouldn’t have been if Lomachenko hadn’t stood on his toes to try and avoid the body shot.

Assuming that Lomachenko fights more aggressively in the rematch, he’s going to take a lot more huge shots from Teofimo early in the fight, and he could get knocked out.

It’s better for Lomachenko to move on and perhaps go back down to 130 to target Shakur Stevenson or the Jamel Herring vs. Carl Frampton fight winner. A lot of boxing fans would like to see Lomachenko take on the winner of the Miguel Berchelt vs. Oscar Valdez match in 2021, but that would be a risky situation for Loma.

Berchelt is expected to beat Valez, and he would give Lomachenko a lot of problems right now. The Loma that we saw last night would likely lose to Berchelt in the same way he did against Teofimo. Loma wouldn’t be busy enough and would get outworked by Berchelt.

“Absolutely,” said Lopez when asked if he’d like to fight the winner of the Josh Taylor vs Jose Ramirez match in 2021. “I think everyone was shook with Loma, and I think people have too much respect for him. And I think that they see that I just a bit down and I put the fight.

“If anything, it’s dangerous for them because that’s where I’m fully hydrated, and I feel much better and I’m faster and I’m stronger than them,” Teofimo said about Taylor and Ramirez.

The only problem that would keep Teofimo from fighting the winner of the Ramirez vs. Taylor fight is the WBO.

Teofimo isn’t going to wait around until 2022 to fight the winner of the Taylor vs. Ramirez fight eventually, and it’s unclear whether those guys will still be at 140 by then.

They’re talking about wanting to move up to 147 to challenge WBO champion Terence Crawford next year.

If Teofimo wants to be involved in a big fight early next year, he needs to stay at 135 and face WBC champion Devin Haney or the winner of the Gervonta Davis vs. Leo Santa Cruz fight.