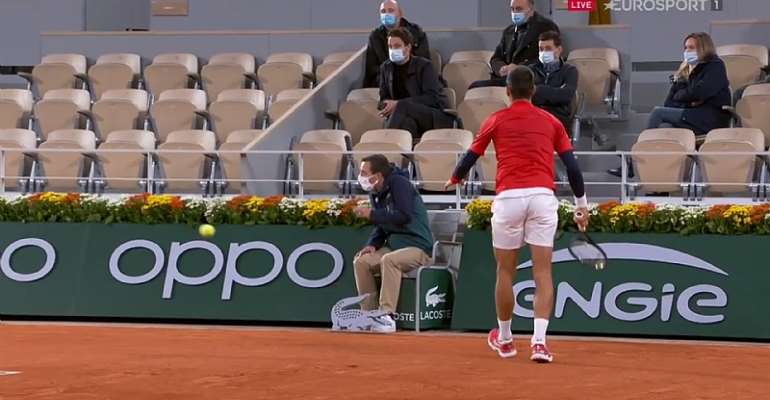 Novak Djokovic hit another line judge with a ball in what was an unfortunate - and entirely accidental - incident at the 2020 French Open.

The world number one was attempting to return a big serve from Karen Khachanov in their fourth-round encounter at Roland Garros when he deflected his return towards the head of a line judge.

Djokovic immediately apologised and ensured the official in question was not hurt - fortunately, he did not appear to be. Unlike his infamous disqualification for striking a line judge with a ball at the US Open last month, Djokovic faced no punishment on this occasion.

Frew McMillan, on commentary for Eurosport, quickly noted that the Serb may have had his mind go back to the nightmare moment he was forced out at Flushing Meadows.

"Oooh, the linesman collected that!" McMillan said on commentary.

BUT HE [DJOKOVIC] WON'T GET DISMISSED FOR THAT. I WONDER IF HIS MIND GOES BACK TO NEW YORK.

Djokovic is the joint-favourite at Roland Garros as the top seed, with Rafael Nadal and Dominic Thiem on the other side of the draw in Paris.