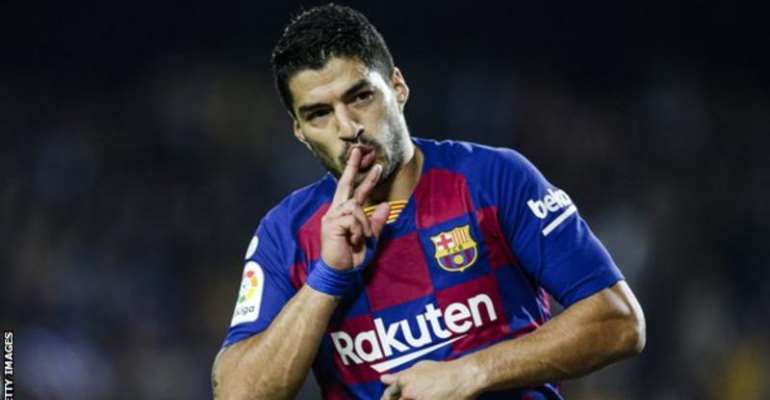 An emotional Luis Suarez said he expected to leave Barcelona this transfer window, but believes he can still play at the top level after joining La Liga rivals Atletico Madrid.

The Uruguayan wiped away tears at a news conference on Thursday as he bade farewell after six years at Barca.

He scored 198 goals in 283 games to become the third highest goalscorer in the club's history.

"I leave with the feeling that I have fulfilled expectations," he said.

However, new Barca boss Ronald Koeman told Suarez last month that he was not in his plans.

"I expected it because it had been said already before the coach told me but I can accept it," added Suarez, who was speaking at a conference hosted by Barcelona. "Players sometimes need a change, the club needed a change and this case the coach didn't want me."

Atletico will pay a nominal fee of no more than 6m euros for the 33-year-old, which will be based on variables such as Champions League qualification.

Suarez has agreed terms on a two-year deal with a reduced salary, although he denies he has taken a step down.

"I feel I'm capable of continuing to compete in this league," he said.

"When Barca told me they weren't counting on me, there were many calls, many offers, but I was able to go to a team that can compete as equals with two great teams like Barcelona and Real Madrid. I had no doubts."

Suarez also denied reports from Spain suggesting his relationship with friend and strike partner Lionel Messi was no longer considered beneficial to the team.

"It's been a crazy month. Things have been invented, things that are not true that have been leaked and that annoy you but we have to try to stay away from all that," he said.

"Everyone knows the relationship I have with Leo. When you arrive at Barcelona they say to be careful with Leo and now after many years, Leo and I get along spectacularly and they say you are bad for him.

"We know the time we had in the team and that we tried to perform at our best and live up to what Barcelona is and in my case, I can leave feeling proud."