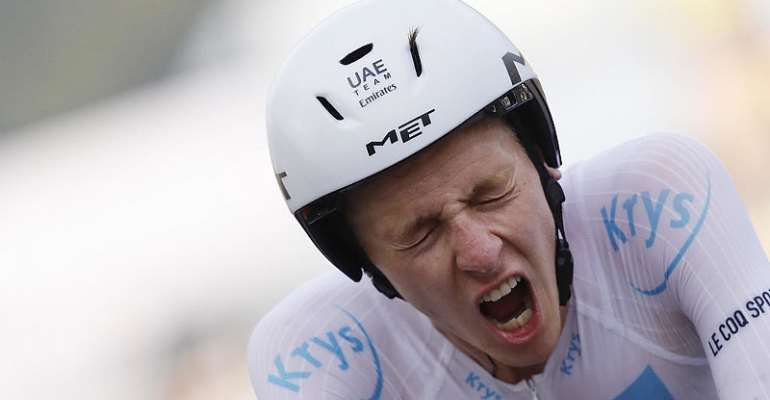 Tadej Pogacar took command of the Tour de France on Saturday after his Slovenian compatriot Primoz Roglic let a 57 second lead slip during an individual time-trial on the last day of competitive racing.

It was an unexpected end to the competitive part of the world's most prestigious race.

The duel between the two Slovenians is likely to go down as one of 2020's great sporting moments.

Pogacar, 21, who won the 36.2km stage between Lure and La Planche des Belles Filles in 55 minutes and 55 seconds, will lead the peloton into Paris on Sunday wearing the overall leader's yellow jersey.

Barring disaster, he will climb onto the top step of the podium after the traditional finish along the Champs Elysées.

He will also boast the polka dot jersey as best climber on the Tour and  the white one as best under-25s rider.

"My dream was just to take part," said Pogacar of his first Tour.

Effort
"I could hear nothing on the final climb and I went for it with everything," he said.

"It was such a sweet moment," said 35-year-old Porte. "Everyone knows the journey I've been on to finally end up on the Tour podium after growing up in far away Australia.

"The two Slovenians were on another planet to us, they threw bricks at each other, there was no holding back," said Porte."

Meltdown
Roglic, who had led the race since stage nine, finished one minute and 56 seconds behind Pogacar who is set to become the youngest winner of the race since the end of the second world war.

Sporting yellow for the first time in the three-week race, Pogacar said: "I'm really proud of the team. They did such a big effort on the way to get the yellow jersey on the final day. We were dreaming that from the start and we achieved it.