Kai Havertz Not Worried By How Much He Cost 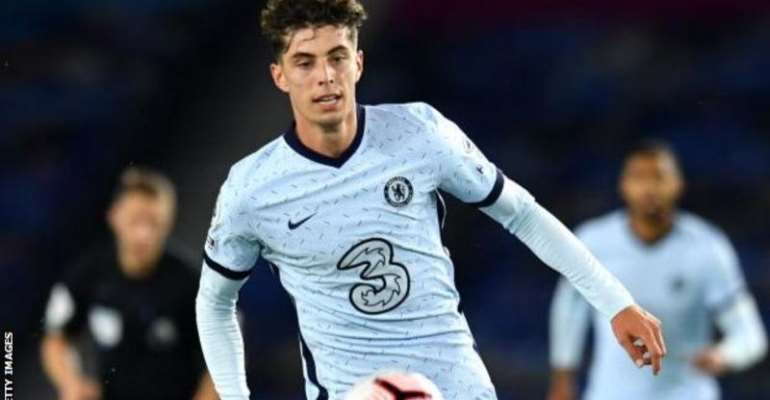 Chelsea's £71m midfielder Kai Havertz says he does not feel burdened with how much he cost and is "very excited" to learn from manager Frank Lampard.

The German joined the Blues from Bayer Leverkusen earlier this month, having also been linked with Real Madrid.

"In football today it's normal to pay these prices," said the 21-year-old.

"I will not put a lot of pressure on myself because I think I'm not doing the worst things in the past - that's why the price tag was high."

Havertz, who made his debut in Chelsea's 3-1 Premier League win at Brighton on Monday, is regarded as one of the top young players in Europe and is a versatile midfielder.

He scored 18 goals in 45 appearances for Leverkusen last season, including seven in nine matches after the Bundesliga campaign restarted after the coronavirus shutdown.

Havertz said playing in England for Chelsea already meant his "dream came true very early" and added: "It's a very big step to come from the Bundesliga to the Premier League. It's the best league in the world.

"I will need some time to adapt, but I'm looking forward to it."

Havertz, capped seven times for his country, is relishing working with Blues boss Lampard, who expects goals and assists from his signing - part of about £200m worth of new talent to arrive at Stamford Bridge this summer.

"I loved [Lampard] as a player. I watched him as a kid and he was one of the biggest players in England," said Havertz, who can operate in several positions but favours playing as a number 10.

"He also likes the way I play as a midfielder - to go in the box, to score goals and make assists. When you have a manager who has played for such a long time in the Premier League and the national team, he can give me tips.

"He will help me a lot to become a better football player and midfielder, so I'm very excited he is my manager now."