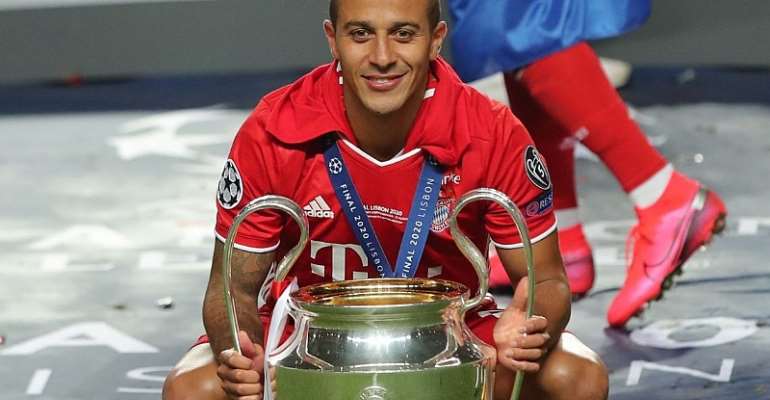 Liverpool have agreed a fee of around €30m (£27m) to sign Bayern Munich midfielder Thiago Alcántara.

The Premier League champions have been strongly linked with 29-year-old Thiago all summer but had delayed making a bid, prompting rumours that Manchester United were ready to come in and strike a late deal to sign the Spaniard who has just one year left on his Bayern contract.

Liverpool have always been Thiago's preference, however, and The Athletic have revealed that Jürgen Klopp's side have finally made their move to bring him to Anfield.

Bayern chiefs made it clear that they wanted Thiago's future sorted out before the Bundesliga season starts on Friday, and Liverpool have now agreed to the German side's demands.

Liverpool are yet to reach an agreement with Thiago over personal terms, although that is not expected to be a problem. Both parties want the move to go through and are prepared to sit down and thrash out a deal in the near future.

Klopp has long seen Thiago as one of the world's best midfielders and quickly jumped at the chance to express his formal interest when it became clear that the 29-year-old wanted to leave Bayern.

The Bundesliga side were reluctant to let him leave, but with one year remaining on his contract, they ultimately had no choice and have agreed to send him to Liverpool.

What this means for Liverpool's Georginio Wijnaldum is unclear. It was believed that Thiago would only be signed if the Dutchman was sold to Barcelona, although reports of such a move have died down in recent days.

Klopp has made it clear that Liverpool will not be spending big this summer, with any transfer business likely to be funded by the sales of current players.

Wijnaldum's future will remain up in the air for now, while this move for Thiago will also intensify speculation that the likes of Harry Wilson, Marko Grujić, Xherdan Shaqiri and even young Rhian Brewster could be sold this summer.