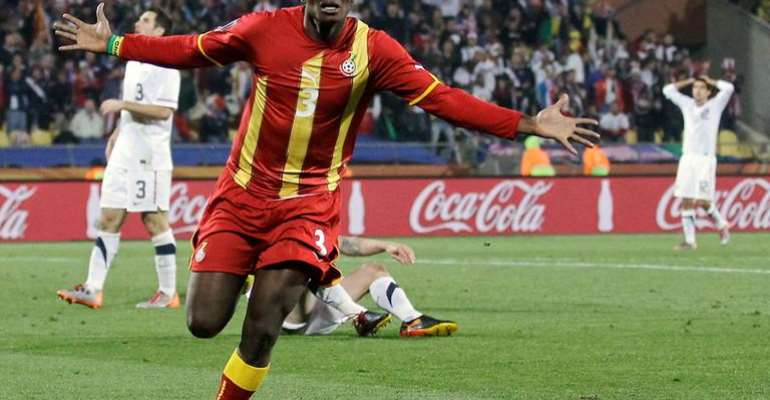 Former Ghana international, Sam Johnson beleives the Ghana Football Association [GFA] must give Asamoah Gyan a befitting send-off when he retires from football.

The 33-year-old has lost his Black Stars after the 2019 Africa Cup of Nations [Afcon] in Egypt.

Prior to the tournament, the former Sunderland forward was stripped of his Black Stars captaincy by Kwesi Appiah and was offered a new role as the General captain of the team.

Despite being clubless after leaving NorthEast United FC, Gyan has consistently reiterated that he is always fit and ready to the Black Stars.

But the former Hearts of Oak defender believes Gyan deserves a befitting send off when he retires.

"It would be good for them to organise a testimonial match, but I don't think they will do it. It's never in their minds to organise such ceremonies for our players," he told Kumasi based Hello FM.

"It would have been good for Ghana to do that but as I said they wouldn't do it.

"I hope they'll listen and find something to do. Have you seen them organised such programmes for the great players who played for Ghana before our era?

"It is never in their minds but it would have been a nice thing to do," he added.

Gyan remains the country's highest goal scorer with 51 goals and has played in several Afcons.

He was a key figure when Ghana qualified for its maiden World Cup appearance in Germany. in 2006. Gyan also played in the 2010 World Cup in South Africa where Ghana played in the quarterfinals for the first time in the history of the country.

The former Al Ain and Kayserirspor forward also played in the 2014 World Cup in Brazil.

He also remains Africa's highest goal scorer in the history of the World Cup with 6 goals.

It is unknown if he would be called up by CK Akonnor in his next call up for the 2022 Afcon qualifiers against Sudan.