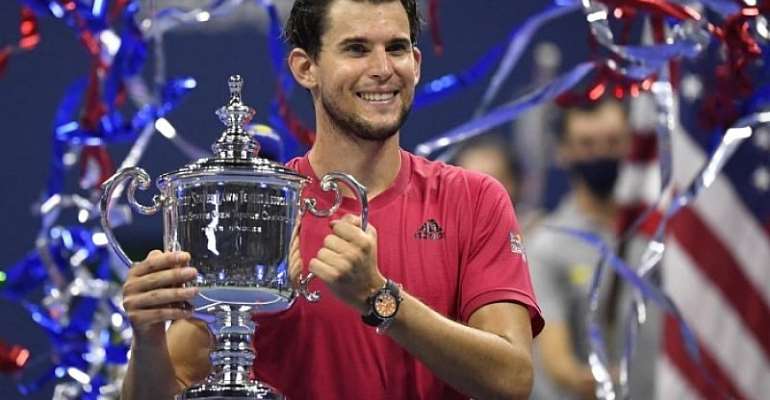 Dominic Thiem completed an astonishing comeback from two sets down against Alexander Zverev to claim his first Grand Slam title 2-6 4-6 6-4 6-3 7-6 at the US Open.

Zverev roared into a two-set lead with the Austrian not able to establish himself at all, but that was just the beginning of the drama. Thiem won the next two sets to prompt a decider, only for both players to fail to serve out for the title in agonising fashion.

For the first time ever, a men's singles final had to be decided in a fifth set tie-break, and Thiem came through to take it 8-6 amid unbearable tension to triumph and finally clinch his maiden Slam title.

The 27-year-old, beaten in his first three Grand Slam finals, came into the showpiece match as the favourite and having dropped only one set en route to the final, but his sluggish start to the match almost cost him the title he so cherished.

Thiem, who was cramping late on, squandered two match points from 6-4 up and on the cusp of glory but he finally came through to snatch victory away from Zverev in dramatic fashion after four hours and two minutes.

For Zverev this was a heartbreaking defeat after he squandered an opportunity to serve out for the title in the deciding set having already let a two-set lead slip, but it was a brave performance nonetheless from the 23-year-old.

Thiem cut an exhausted figure after he came through having himself failed to serve out for the tournament prior to the tie-break, but this could represent a turning point in his career now that he has finally broken his Grand Slam duck.

"I wish there were two winners today, we both deserved it," Thiem said on court after a tearful speech from a crestfallen Zverev.

"I'd also like to start with you, Sascha. We started to know each other in 2014 when we were both ranked 100th or something and straight away we developed a great friendship.

"It is amazing how far our journey brought us. Then in 2016, I think, our great rivalry started again and we made great things happen on and off the court."

The world number three became only the second Austrian ever to win a Grand Slam title, and the first to triumph at Flushing Meadows in a memorable and astonishing climax to a unique edition of the US Open.

The second seed, who became the first man to come back from two sets down in a US Open singles final in the Open era, is also now the first besides the big three of Rafael Nadal, Djokovic and Roger Federer to claim a Grand Slam since Stan Wawrinka won at Flushing Meadows in 2016.