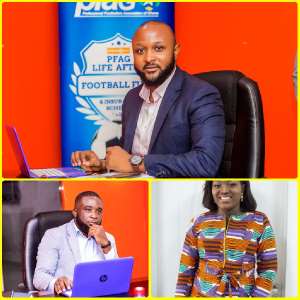 Ghana Beach Soccer has received a huge boost with the appointment of five Ghanaians to serve on various committees of the African Beach Soccer Union (ABSU).

The appointments were confirmed after an Executive Committee meeting was held in late August to deliberate on issues relating to the future of the rapidly growing sand sport across the continent.

Broadcaster and Ghana Beach Soccer Chairman Yaw Ampofo Ankrah has been handpicked to head the Media/Communications and Branding team of ABSU.

In a release from the ABSU secretariat in Lagos – Nigeria, referee George Darko has also been given a role on the Technical and Youth Development Committee.

Other appointments include Nana Poku Amankwah who is currently the organizing secretary of Ghana Beach Soccer. He will now serve on the Competitions Committee of ABSU.

There is also an appointment for Ghana Beach Soccer Media officer Dennis Mensah and Ruben Dzidodo Adjahoe (CEO of Keta Sunset) who have been appointed to serve at the Union Secretariat.

TV3 sports producer and reporter Mrs Janet Amankwah has also been given a role to serve on the Beach Soccer Women’s Development Committee of the Union.

The President of ABSU who also heads Kebbi Beach Soccer is Mr Mamud Hadejia known as a pillar in the drive to get beach soccer on the continent more funding and infrastructural development support.