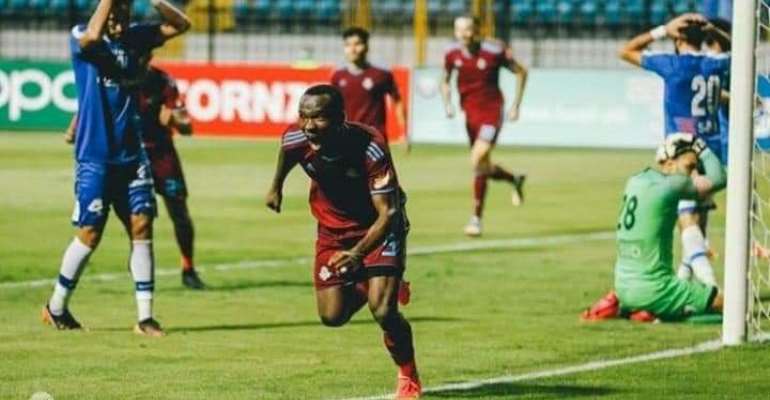 Ghanaian striker John Antwi made history on Sunday when he became the first foreign player to score 100 goals in the Egyptian Premier League.

Antwi’s feat was achieved after he opened the scoring in the 44th minute for Pyramids away at El Gouna, although they eventually lost the match 2-1 thanks to a brace by Walter Bwalya for the hosts.

The 28-year-old Antwi also has the enviable record of playing for four clubs in the Egyptian top-flight.

Antwi first became the highest-scoring foreigner in the history of the Egyptian league last season after scoring 63 goals to surpass compatriot Ernest Papa Arko who also played for four clubs in the country.

During his time at Ahly, he was loaned to Misr El-Makasa where he plundered 22 goals. This earned him a permanent transfer where he scored another 18 goals.

In 2019 he transferred his talents to moneybags Pyramids where he has scored 14 goals since joining them. However, he has only managed to score five times in 23 matches this season.

Pyramids are currently in third place on the Premier League log two points behind Zamalek and two points clear of Arab Contactors.

Antwi’s career started back in his homeland with Dreams F.C., a Ghanaian club that competed in the third division of the league. While playing for Dreams F.C. he was invited to the 2010–2011 preseason trials of Accra Hearts of Oak but couldn’t agree on a contract despite scoring five goals in seven friendly matches.

He eventually began his top-flight career one of Ghana’s oldest clubsides, Sekondi Eleven Wise F.C. based in the coastal city of Sekondi in 2011.

Surprisingly, he has yet to establish himself on the international scene as he remains uncapped by the Ghanaian national team, The Black Stars.

In mid-2013 there were several calls by the public for the player to be included in the team for the 2014 FIFA World Cup qualification matches but nothing materialized.