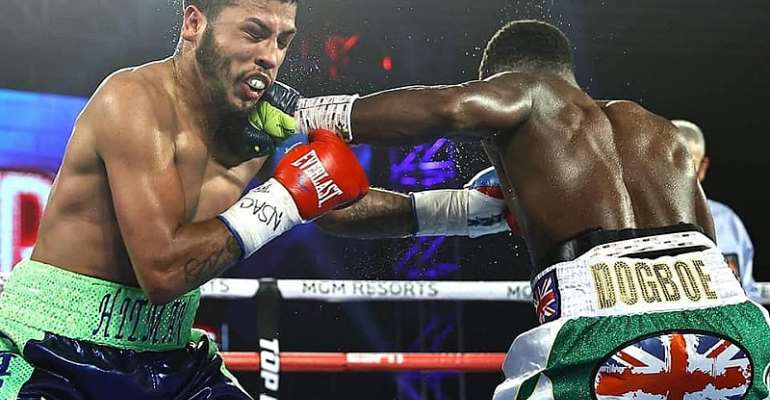 Ghana boxer, Isaac Dogboe has recorded a Round 8 Technical Knockout (TKO) victory against American Chris Avalos on his return to the ring after staying away for over a year.

Following successive defeats to Mexico’s Emmanuel Navarrette which saw the Ghanaian losing his WBO World Jnr Featherweight title, he took a break from the sport to further his education.

On his return to the ring as he moves up to the Featherweight Division, Isaac Dogboe, nicknamed the Royal Storm faced off with Chris ‘The Hitman’ Avalos in an 8 - round contest staged at the MGM Grand Arena in Las Vegas, USA, in a bid towards warranting a place in the rankings of the division.

The Ghanaian boxer who is currently being trained by Barry Hunter and Patrice Harris appeared in good shape as he dominated his opponent with good combination shots right from Round 1.

Dogboe, 25, continued his dominance in the subsequent Rounds with Chris Avalos having a few moments of glitter. Though the American will cause problems in the 7th Round, Isaac will come in stronger in the final round to land dangerous punches.

Eventually, referee Russell Mora had no choice than to stop the fight to protect Chris Avalos who was on the receiving end of constant punishment from the former WBO World Jnr Featherweight champion.

That ultimately handed Isaac Dogboe a win by TKO on his return to the ring. The victory sees Isaac Dogboe improving his record to 19 wins [15 KOs] and 2 defeats from 21 bouts.