Laryea Kingston Partners Tullow To Give Back To Ghana Football 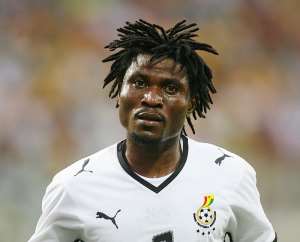 In 2019, Laryea Kingston joined the team at the Right to Dream Academy as a coach and mentor because he wanted to be able to pass on some of his experiences and lessons to the next generation of talented boys and girls in Ghana.

Kingston said: "I had known about Right to Dream for a long time and always respected what they do for the kids. For them, it is not just about football but their education and their character development."

Tullow are the headline education partner for the Right to Dream Academy in Ghana where they support the education programme for every student, giving them a core foundation that empowers them to go on to win world-class opportunities in education and football when they leave the academy. Tullow have also supported the Right to Dream Girls' programme since its creation, which is one of a kind in Africa.

According to Kingston, he was invited by Mr Awotwi to go on a trip to America to visit some of the partner schools, to see the next steps for many of the Right to Dream girls and boys that win full scholarships to high school and university in the US.

"The trip was unbelievable. The opportunity these kids are getting, in my time we did not have that opportunity. It was humbling and inspiring to see the kids and what they are achieving and then getting to meet their families in Ghana."

On his trip, Laryea also had the chance to meet up with Black Stars and professional player David Accam, a Right to Dream graduate. David is known not just for his football, but also his commitment to giving back and making a difference in his community.

He was the first Ghanaian player to join Common Goal, the global charitable initiative set up by leading pro players.

Laryea said: "You can see that the professional players coming out of Right to Dream are not just talented but also ambassadors. That is why I enjoy working with them so much. They are the next generation of leaders for our country."

Tullow and Right to Dream have collaborated to send 30 boys and girls to some of the leading schools and universities in the US and UK, as well as supporting 26 others to become professional footballers.