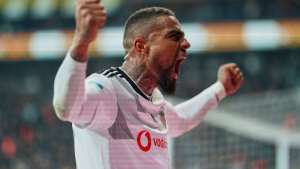 Besiktas will renew the loan contract of Ghana forward, Kevin-Prince Boateng if he plays at least 45 minutes in 10 games.

“If he plays 45 more minutes in 9 games, his contract will be extended. There will no rental,” Besiktas manager Emre Kocada said on the conditions for his loan deal to be made permanent.

“He played one, his contract will be extended if he plays 45 more minutes in 9 games. There will be no rental fee, we will only pay the full salary next season.

Boateng has scored two goals since joining the Black Eagles from Serie A side Fiorentina in January.