Eliud Kipchoge: “Sports Is The Only Way To Unify The World.” 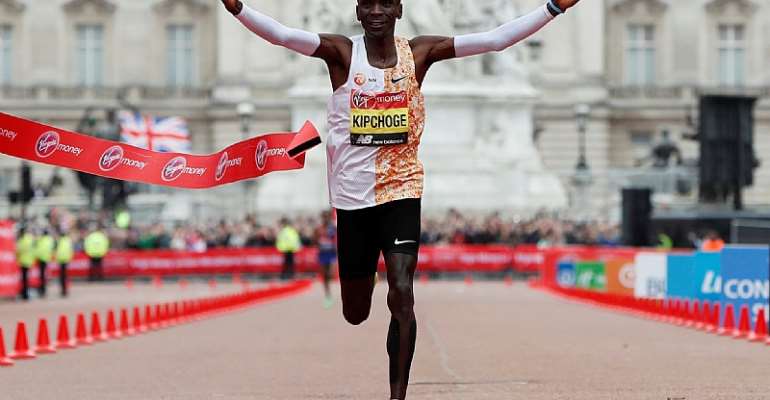 When asked about the current unrest sparked by the death of George Floyd in police custody in Minnesota, the Kenyan world record holder said that he “fully supports those who are fighting for their rights.”

He said this is sport’s moment to heal the world.

“I support those who are fighting for their rights, but we need to fight for our rights in a good way. We should not break into someone’s premises, damage other people's cars. We need to express our sentiments sensibly,” he said on Thursday.

In response to a question from Olympic Channel during a webinar hosted by National Olympics Committee of Kenya over Zoom, Kipchoge said that the focus should be on the power of sport.

“Sport is a powerful tool. Sport is what drives the world. For example, 73% of people who were admitted in ICU because they were affected by Covid-19 were unfit. So, it is clear sports will rule the world. If we can all adopt sport as a lifestyle, we will be in unity and it will fast track the world’s development.

In 2019, he made history by breaking the two-hour marathon barrier in October in Vienna.

It was not officially recognised as a world record as it wasn't in open competition, but the 1:59:40, his ‘favourite race’, remains a genuine moment of human achievement.

Kipchoge has been training in solitude during the lockdown. He was eyeing an unprecedented fifth London marathon title, but the race has been postponed to October 2020.

He told Olympic Channel that the coronavirus pandemic disruption was a huge disappointment, but he had accepted the change.

“Marathons are like life, we have flat courses, downhill and hilly courses. Now we are on a hilly course, this is the hardest of times. And like in a marathon that’s when you are struggling to go up the hill."

He has taken the time off to work with the Kenyan government and his sponsors to distribute food packages to athletes who have been affected by race cancellations.

“We have many athletes in Kenya, and for 80% of them what puts food on their table – and for their families – is participating in races in Europe, North America, Asia and Australasia for financial means. That’s what they were relying on. So last week, we provided about 70 athletes from five counties in Kenya with food for the whole month,” he told Athlete 365 last month.

With Tokyo 2020 postponed to July 2021, Kipchoge treats the extra 12 months 'as a gift’ to get himself in shape for his title defence.

“Olympic is the number one Games in this world. Just to make the Olympics is a big step. The second step is to participate. The third step is to go and fight for that medal. Olympics is as critically crucial as a kidney in a human body. It is the peak of sports.”

Olympic glory
The gold from Rio was his third Olympic medal after winning silver at both Beijing 2008 and Athens 2004 over 5,000m. He is also a World junior cross-country champion and a world 5,000m champion.

Kipchoge shared how missing London 2012 inspired him to gold in Brazil.

“In 2012, I was really down when I missed the ticket to the London Olympics after failing to secure a spot in the 5,000m and 10,000m team. It was one of my lowest moments. For the 10 years, I was on track and field till then, I always made the team to every championship. It was shocking for me to miss 2012, the shock moved from my toe to my head.

“But I went back and sat and thought that missing one big event is not suicide, tomorrow is another day. I treated that as a challenge. Anytime I face a challenge, I take it as a lesson, I don’t lose, I always learn - that’s what I have been doing for the last 17 years.

"I understand why I failed. I am a deep believer in myself. I was also surrounded by good professional people, my coach [Patrick Sang] is a life coach,” said Kipchoge, who won the Rio 2016 marathon with the biggest margin in 44 years.