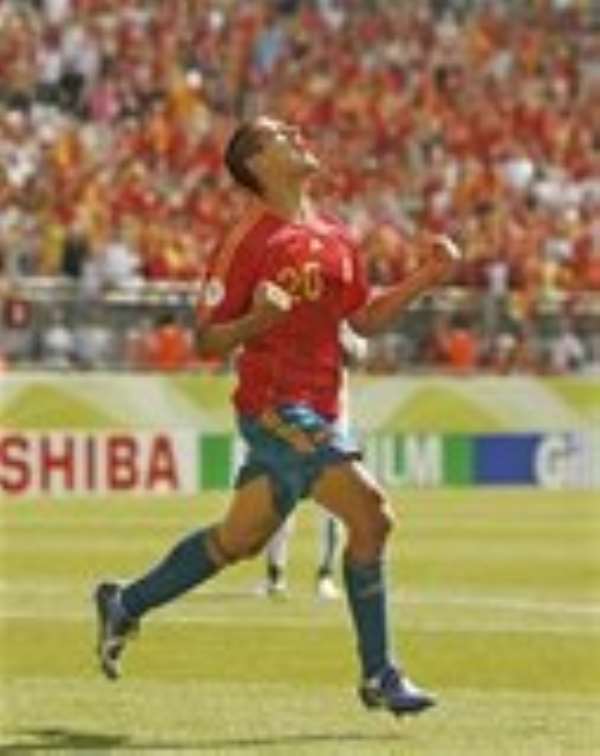 Spain advanced to the Round of 16 with a third win under their belts as they beat Saudi Arabia 1-0 in Kaiserslautern on Friday, 23 June 2006.

Juanito's 36th-minute header was enough to separate the teams and confirm the Saudis' elimination after one draw and two defeats. While Marcos Paqueta's men pack their bags to go home, Spain, as Group H winners, can look forward to facing the second-placed team in Group G (one of Switzerland, Korea Republic or France) in Hanover on 27 June.

The match:
With Spain already secured their second-round berth coach Luis Aragones fielded a new-look line-up and there were also changes in the Saudi Arabia side with Sami Al Jaber, Saad Al Harthi and Abdulaziz Khathran all coming into the starting XI.

8': Spain struggled to find their feet in the opening stages, their much-changed team showing none of the fluent football displayed in their wins against Ukraine and Tunisia.

14': Saudi Arabia suffered an early setback as midfielder Khaled Aziz was forced off with injury and replaced by Nawaf Al Temyat. Two minutes later came the first chance for Spain as Joaquin's shot from the edge of the area sailed narrowly over Mabrouk Zaid's goal.

17': Spain turned up the pressure and created another chance through Jose Antonio Reyes just a minute later. The forward beat Hamad Al Montashari on the left-hand side and pulled the trigger with his right foot but Zaid was well positioned and parried to safety.

29': Two chances for Spain within a minute. First, Zaid saved from David Albelda after a delightful through-ball from Cesc Fabregas, then Joaquin went close with an 18-yard effort after a masterful solo run.

30': Spain were clearly in control but they were out of luck in front of goal. At the other end, Saudi Arabia were offering nothing as an attacking force with Spain goalkeeper Santiago Canizares untested on his first appearance in these finals.

36': Spain finally took the lead from a set-piece. Reyes fired in a free-kick from the left-hand side, and Juanito rose six yards out to head home. (1-0)

42': Saudi Arabia had their first shot on goal through Al Jaber. The striker attempted to beat Canizares with an audacious flick, but the goalkeeper was alert to the danger and saved comfortably.

43': Spain almost went 2-0 up before the interval. Reyes met a cross from the right-hand side from 14 yards out but Zaid denied him yet again.

Villa on, Raul off:
50': The pattern continued after the interval. Spain, with Villa on for captain Raul, dominated the play, creating chance after goalscoring chance. A Reyes shot from 18 yards was saved by Zaid, who parried an Antonio Lopez effort shortly after.

57': The first clear-cut chance for Saudi Arabia and Canizares could only hold Hussein Sulimani's 25-yard shot at the second attempt.

57': Joaquin went close with a shot from the left-hand side after a Spanish counterattack. Minutes later the winger was on the prowl again but Zaid was alert to the threat as the game threatened to become a duel between the Spanish team and Saudi shotstopper Zaid.

70': Saudi Arabia almost equalised as Spain let their guard down. Sulimani went one-on-one with Canizares and struck a left-foot shot from a tight angle which the keeper parried to safety.

70': Spain coach Aragones sent on Xavi and Fernando Torres for Fabregas and Reyes. Paqueta also shuffled his pack with veteran Al Jaber taken off on his 163rd and possibly final international game to be replaced by Malek Al Hawsawi.

78': Saudi Arabia were now competing on level terms with the Spanish team who had shifted down a couple of gears, doing just enough to preserve their lead.

90': Saudi Arabia had a great opportunity before the final whistle. After a good build-up from Mohammed Noor, Al Harthi blazed his shot over the bar from close range.

In conclusion:
It was ultimately a deserved victory for Spain's second-string who were in control for almost the entire match but were wasteful in front of goal. Saudi Arabia had the game's outstanding player in goalkeeper Zaid, who made a host of quality saves to prevent a landslide defeat. While Saudi Arabia head for home, Spain can look ahead to the knockout stage with confidence.

When I meet Bawumia I'll tell him he's an economic comedian ...
16 minutes ago