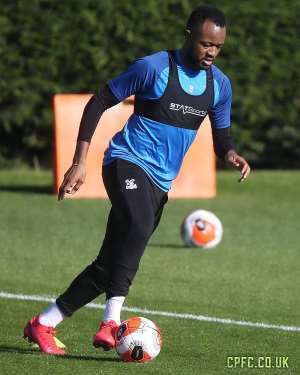 Ghanaian duo, Jordan Ayew and Jeffery Schlupp have both returned to training at Crystal Palace after an induced break due to coronavirus outbreak.

Ayew, who is Crystal Palace top scorer underwent coronovirus test before returning to the pitch in small groups to train, amid strict measures to control the spread of the disease.

Jeffery Sclupp
The players started with stage one of the training protocols Which enables squads to train while maintaining social distancing, but contact training is not yet permitted.

A total of 25 players were present on Tuesday, and there were three sessions for three groups.

They are expected to move to the next phase in the coming weeks as they gear themselves for the league return.

The Premier League has been suspended since mid-March due to COVID-19, but it is expected to return in June.

Ayew has made 28 league appearances and scored eight goals for the Eagles as they lie 11th on the league table with 39 points after 29 matches played thus far.