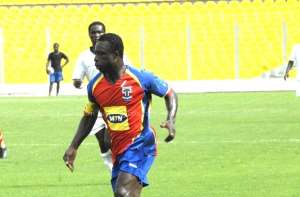 Former Black Stars forward, Charles Taylor has indicated that he wants to become one of the best coaches in the country very soon.

The retired player has been having a stint in the lower division but believes he is ready to further his coaching studies to ensure he upgrades himself in order to be able to dine with the big men.

Speaking to Peace FM, Charles Taylor has disclosed that he will immediately work on obtaining his coaching badges when the Coronavirus (Covid-19) crisis is over.

“I have in mind to be a professional coach. I started coaching five years ago with a second division side without certificate due to one or two reasons but I’m hoping to enter into coaching career after the virus”, the former Hearts of Oak and Asante Kotoko attacker shared.

He added, “I owe a second division club and I am their coach. I’m waiting for the disease to come down so I start with the course at Prampram. I’m very focused on becoming a topnotch coach in the country”.

Charles Taylor is celebrated as one of the best players to ever come out of Ghana. During his playing days, he won several individual accolades including the 2002 Ghana premier league Top Scorer award [shared with Bernard Dong Bortey], the 2002 SWAG Sports Personality of the year award, and the 2001 GFA player of the year.