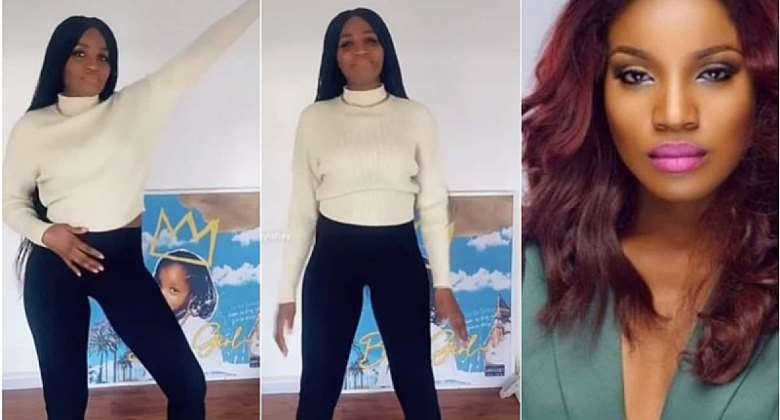 Seyi Shay first took listeners' minds to her past through her album cover, showcasing them a personal reflection that could bond them as it was when she looked younger as a growing teenager. She's bright and ambitious in the photo, like the one who has continued to yearn for greatness right from a young age.

Seyi has been hard-working all through her career run, has released her debut album in 2015 titled 'Seyi Shay', while she also partook in the release of a series of accurately orchestrated records alongside her sophomore album "Summer Vibe" in 2018, which her growing cult got stuck. Summer Vibe was what it is as Seyi Shay has always been a genius putting great songs together. She has been intentional to date.

Well, Big Girl tends to covet her into larger music spaces, as She looks towards gaining higher grounds as she currently created a new Instagram account with a vision and purpose which seem to be lurking around the acct creation; from the name specifically. It is also intentional.

However, her new handle is akin to Burna Boy's current Instagram handle as it has always reflected his lacer focus at the Grammys. While Seyi's new acct is under her management, her cult speculates her gearing towards the birth of something much stronger amongst her female counterparts. She might have begun to pull strings towards conquering larger music spaces as well through this album. Meanwhile, Seyi Shay understands that the culture range is taking a new shape and transition as creators of her kind seek to cement their way through.

She refers to herself as the "Big Girl" and it is experienced through a range of thoughts that concerns her life and artistry; she also rendered sets of reflective songs from her love life and relationship, mixed with sex and fandom; her being more personal with an addendum of braggadocio as the big girl with all the cash and independence. She also hits back at her denigrators and continues to question them.

The third track "Big Girl", produced by Kel-P alongside the opening record "Maserati Sexy" featuring the British-born grime star BackRoad Gee, gives a reflection of her thoughts as the big girl with independence and a mixture of braggadocio as she is proud of her melanin popping beauty. BackRoad Gee's delivery is nostalgia as much as the third track becomes so pensive and classic enough.

Seyi's collaborative effort on this album properly flows nostalgia. She looks towards breaking new grounds and draws inputs from a range of Western creators.

The American Shay Jone's effort on "Mine" is a classic, although it accompanied rap verses along the line and explores Seyi's personal experiences as she continues to wonder and question her denigrators why they want to take her life and make her cry. "Let Me Know" is one of the most exceptional R&B dubbed Afrobeats records on this project where you get the full taste of Seyi's vocal range, she sings as one in love. However, her man isn't ready to ride with her yet but she requests he let her know whenever he is ready for her.

Meanwhile, the Portuguese Calema's effort on the second joint portrays a worthy love and relationship storyline for "Stamina", which also becomes a special R&B classic, although it's more like an expression of a drunken love that naturally loves to explore sx3 and fandom. Stamina is strength and it is what determines longevity during copulation. However, Seyi often regards sex in her life and places much importance on it.

Simi, Wande Coal, and Yemi Alade's effort closing the project with "Pempe", tells the story of love preparing to take off which crashed along the line due to several reasons which Seyi Shay doesn't feel comfortable with as she sings, "You yarn me say, you want a serious somethin' (pempe)/We just start to yarn, you say you want my cookie (pempe)/I've drawn the line, if you get mind make you cross (pempe)/And dis alarm must sound, if you touch my private property oh, yeah"

Simi's effort on "Glowanna" is nostalgic and it can shape listeners' perspectives about themselves, basically to love and appreciate how they've been created. Seyi Shay and Simi carefully depended on each other to properly deliver on this record. They glow together and share it with you as well. While Wande Coal's bash for the Kel-P produced "Ride For You" becomes an example of faithful love as Seyi Shay confessed that she'd ride for her lover till the wheels fall off. The chemistry here is undeniable even as Wande Coal's delivery is a rare kind and it seems like one which could drive him a greater amount of attention. He is a reggaeton genius indeed and Seyi doesn't seem to surprise me a lot because her diversity becomes evident on Big Girl.

In conclusion, Big Girl is Seyi Shay being innovative, being versatile as well as cherry-picking the right set of creators to accompany her current state of mind. She is independent and also having the best times of her life even as she yearns to break more grounds and reach her full potential. The harmony of Big Girl is undeniable as much as the album sequencing, cohesiveness, proper record production, and the songwriting in particular. While track eleven titled, "Outro" is more promotional, although it is worthy enough.