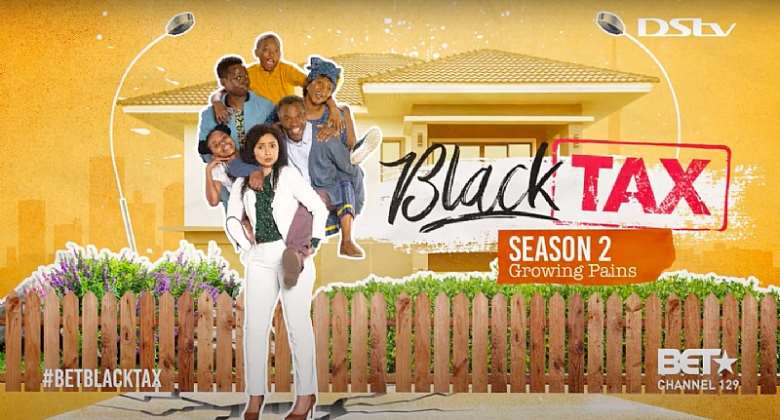 BET Africa (DStv Channel 129, GoTV Channel 21), in partnership with Showmax, is proud to announce the highly anticipated Black Tax Season 2, starring lead Jo-Anne Reyneke who portrays the character of Thuli Dlamini. The first-ever locally co-produced original sitcom with BET Africa and Showmax scooped a SAFTA for Best Scriptwriting in a TV Comedy. With new and existing cast members, the premiere airs on BET Africa on 9 October at 18:00 WAT/19:00 CAT.

Black Tax is a hilarious, fun and light-hearted sitcom entrenched in the culture of black tax. If you think you’re just earning your way in this world, think again because it’s payback since the first paycheque. The original sitcom follows a black professional, Thuli, who grapples with the unsaid aspect of her community that affects most middle-class African people. Thuli has to deal with the unspoken law that most viewers can resonate with of paying back to the family and extended family. Season 2 will see Thuli going to night school to up-skill herself, in order to rise above her black tax. Look out for a host of new celebrity cameos as well as returning Season 1 favourites.

Jo-Anne Reyneke commented, "I'm beyond excited about Black Tax Season 2. I've been waiting so long to be with my cast mates/family in the crazy, fun and safe environment we've created with each other. What's even more exciting is all the new characters that have joined our family, and we've been jelling so well. The script is funnier, there are way more laughs on set, sometimes it's really hard to get through scenes without bursting into laughter. All in all, I'm really excited for people to see it."

The second season of Black Tax welcomes new cast members - the legendary thespian Owen Sejake, the funny and talented Motlatsi Mafatshe and newcomer Asante Mabuza - to expand a storyline as the meddlesome new neighbours of Thuli and her crazy family. Motlatsi plays Nkanyiso, Thuli’s potential love interest, while Owen plays the character of Bra Hugo, an old player and Nkanyiso’s father. Asante will portray the character of Lulu, Nkanyiso's daughter.

“We’re excited to be putting the team back together for Season 2 of Black Tax. After 6 SAFTA nominations, including Best Comedy, and 1 win for best writing, it's especially rewarding to be back on set with BET Africa and Showmax, creating comedy magic as we take a look at the lighter side of the black tax phenomenon in South Africa. Lwazi Mvusi, Byron Abrahams and Meren Reddy have again brought their award-winning writing skills to bear, but this season we're expanding the cast with some very interesting additions to the Dlamini family's world," said Luke Rous, Executive Producer at RousHouse Productions.

To enjoy all the laughter, tune into Black Tax Season 2, the BET Africa and Showmax original sitcom that will air from Saturday 09 October at 18:00 WAT/19:00 CAT on the channel that celebrates black culture, excellence and storytelling, BET Africa (DStv Channel 129, GoTV Channel 21. Black Tax S2 will be available on Showmax.

Hottest Photo Reports
Catch up with all the political quotes from our politicians.
Advertise here
More Wazobia nollywood
ModernGhana Links
Accelerate Movie Night: Here’s All That Went Down At The Accelerate Screening Of Sugar Rush Movie
Actress, Ebella Okaro Drags Colleagues to Father-in-law’s Burial
Pa Kasumu Set to Travel to India for Medical Check-up
I Need More Money—Yoruba Actress, Aishat Abimbola
I Will Soon Be Getting Married But Not From Nollywood…….Baba Suwe
I Never Wanted To Remarry, But...—Foluke Daramola
Ngozi Ezeonu For Prestigious Chieftaincy Title In Asaba
MARRIAGE IS NOT ON MY CARD NOW!! I won’t take nonsense from anyone ….Iyabo Ojo
Victor Ashaolu To Rule ANTP Till 2018
TOP STORIES

We are suffering media tyranny; they interview us, create wo...
48 minutes ago

Attempt to put Achimota Forest in the hands of private perso...
1 hour ago