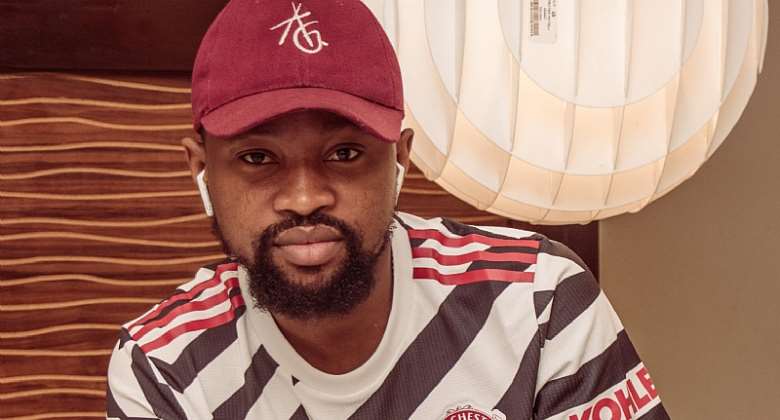 Abayomi Agbeleshe, known to his growing Twitter fanbase as Alake of Lagos, is undoubtedly the breakout star of the record-breaking Showmax original, I Am LAYCON.

From early on, he established himself as the life of the party, while also never hesitating to read the riot act to any erring parties, including his younger brother Laycon, the star of the show.

When he’s not managing his brother’s affairs, Abayomi runs a cleaning and furnishing business on the side. We recently had a chat with the Moshood Abiola Polytechnic graduate, where he talked about life before fame, shooting I Am LAYCON, and his relationship with Lilo’s sister, Alicia, who is also featured on the show.

What were you doing before now?
Before now I was a driver for a cab-hailing service. I drove someone’s car and made a remittance every week. I also did real estate on the side. I would help people look for apartments and then get a commission. I was literally doing anything to survive.

Tell us about your experience as a ride-hailing service driver?

I really like to meet people and I enjoy driving so I loved what I was doing. If I wasn’t doing something else, I would probably be a Formula One driver. Driving cabs helped me meet people and also know a lot of places in Lagos. Before driving cabs, I did delivery services, I didn’t have delivery bikes so I had to jump buses and take okada to deliver my clients’ packages so it helped me know quick routes to pass when I eventually started driving cabs. I met a lot of people on the job, big people, some of whom wanted to know why I was a cab driver despite the fact that I sounded educated but I let them know that this is Nigeria, and sometimes you have to do anything to survive.

Any memorable moments from the job?
Sometimes people would confide in me. You know the conversation would start and I would wonder ‘Why is this person telling me this type of thing?’ Then I would think maybe this person just needs someone to talk to. Many of my customers went on to become my friends and that helped during Big Brother. When the show started, I would drive cabs from about 6am to 10am, then go to the voting centres. So within that time slot, if I pick up a customer, I would ask them if they watch Big Brother and who their top 5 housemates are. If Laycon is in the top 3, then your ride is free. I did it for the first three weeks, then things got very intense and I couldn’t keep up anymore because the schedules were tight, so I had to return the car to the owner. I enjoyed my cab-driving days, sometimes I would pick up old school mates and they would be surprised to see me, but I wasn’t ashamed of what I did to survive because I wasn’t doing anything illegal.

Has your relationship with your brother changed since he won the show and you started managing him?

My brother and I have always been very close so that hasn’t changed. Rather this has made the bond stronger because it’s like going back to childhood when we had to live together so we’ve grown closer in a more mature sense. However, right now sometimes he’s a boss, and sometimes he’s a brother, so it’s a whole new dynamic because I have to live two lives - the life of a brother and the life of an employee. But it’s been good so far and I’ve been trying to balance things out.

What’s the best and worst part of managing your brother?

The best part is I get to look out for him, and fight for his interests. I enjoy what I do for him and we get to spend more time together. Also seeing him live the dream that we always talked about has been such a blessing: we prayed for days like this and they’re here. The less than pleasant part is sometimes you have to take things that you won’t normally take because I work for him, so it’s about what he wants. But on the whole, there have been more ups than downs.

Did you anticipate the fact that you’d be the breakout star of I Am LAYCON?

Nigerians like to be entertained and I’m an entertainer. When I was in school, I was a club hype man and a compere. I hosted on the red carpet several times so my life has always been about good vibes. So while I wasn’t really expecting to be so big on the show, I knew someone had to bring the spice and I’m glad I did.

Did you have any interest in entertainment?
Yes, I was hoping to one day take Ebuka’s job. The person who actually got me interested in entertainment was Andre Blaze. I started MCing events when I was in school and I had aspirations that one day I would host big events. I have hosted events for Junior Chamber International (JCI) Nigeria, the collegiate conference, and Laycon actually performed at a JCI event I was compering in 2016 at the Obafemi Awolowo University. It was a very big deal to me then. So I’ve done quite a bit of things in entertainment because it has always been a thing of interest for me but management in entertainment was not what I saw coming. However when Laycon hit me up and said he wanted me on his team, I had to put my entertainment dreams on hold. But I’ve had friends whom I hosted their wedding reception in the past so that’s something I'll still continue to do.

It’s been weird. I can’t do some of the things I used to do or go to some of the places I used to because someone always knows you, especially my hair: it always gives me away. But we prayed for days like this so I’m grateful.

Have you gotten any favours with your newfound fame?

Yes, people know you now and want to associate with you. Where you had to make 20 calls in the past to get something done, now it takes just one phone call and it’s done. I’ll chuck it up to grace.

What’s the story of you and Alicia?
We met during Big Brother. At some point during the Big Brother show, alliances had to be formed. When a contestant gets evicted and they have a fave in the house, your teams align. So during the alliance, Alicia was the one in charge of her sister’s campaign while I was in charge of Laycon’s. Our conversations went well and we became friends. After the show, we hung out and got to know each other better. But there’s nothing there; we’re just friends. In fact, my name isn’t saved as Yomi on her phone, it’s saved as Best Friend and that’s how she refers to me anytime we see each other. I love the friendship we have. It has been a very productive relationship on both sides. That’s why when the opportunity to design Laycon’s house came up, I had to plug in my friend because I know she’s good at what she does. It’s also the same way she hits me up when she has projects she knows I can handle.

What was your favourite part of shooting I Am LAYCON?

The crew. I caught cruise with them; they’re fantastic. I actually miss them and many are my friends now. I had fun working with them. A lot of the crew members told me that I would actually make a good actor. I spoke to Laycon one day about it and he said if an opportunity comes up, I should go for it. So right now if premium movies come my way, I’m open to a few roles here and there if the producer feels I will be a good fit.

Our family creed is God, family and duty. Laycon has a strong relationship with God, he’s also fiercely protective of his family and dedicated to his craft, music. You don’t have to be religious to have a relationship with God. That’s how our father brought us up because my dad was never the type to force us to go to the mosque with him despite the fact that we were Muslims. Rather he would tell us to have our own relationship with God. I was once the president of the teenagers church in Redeem and my name is Khalid, so your personal relationship with God is what matters the most and that’s something people don’t know about Laycon. He also always looks out for his people. He’s the person who will randomly pick up the phone and find out how you’re doing.

What’s next for you?
I’m launching my cleaning and furnishing business by my birthday (March 25th) and hopefully we should get clients to start patronising us. Also if acting opportunities come, I’ll definitely grab it.

Latest Photo Reports
Catch up with all the political quotes from our politicians.
Advertise here
More from Interviews
ModernGhana Links
“It is more than acting for me because I see him as my son”, Sola Sobowale and Titi Kuti share about their relationship on #WithChude
Paul Okoye: Family, Legacy, Rudeboy
20 Years Of Promoting Nollywood Films, African Music Culture In Europe, Isaac Izoya Speaks
TOP STORIES