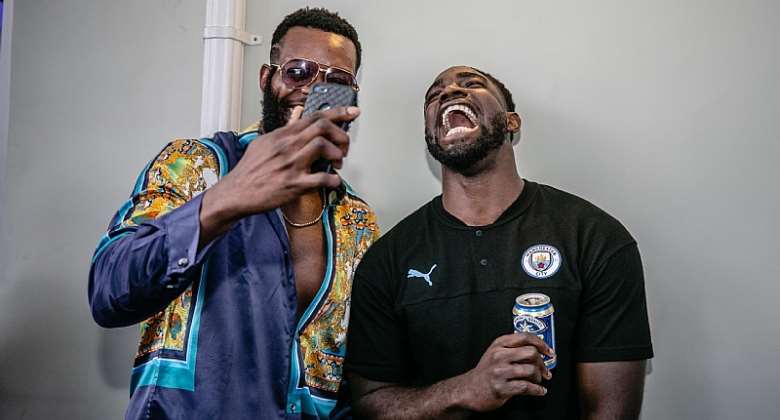 Manchester City former right-back, Micah Richards, was in an upbeat mood when he made a quick stop in Nigeria as part of the Man. City Global Tour courtesy of STAR Lager, the official beer partners of the English football club.

At an exclusive meet and greet, organised by the beer brand, Micah who was clearly loving his time in Nigeria, had a lot to say about the wealth of football talents to have emerged from this part of the world.

Topping his list of Nigerian all-time greats, was Jay-jay Okocha, a player Micah called ‘special” and “full of magic”. He also expressed his admiration for Mikel Obi in his prime, as well as Alex Iwobi, who recently departed Arsenal FC for Everton.

Richards said he’s a big fan of Iwobi and even congratulated him on his goal-scoring debut at Everton. Fans were pleasantly surprised to see just how much Richards knew about African football and he certainly made an instant impact on the Nigerian fans, most of which were excited to get up close and personal with the Ex-City Star.

Fans also got the chance to see the six silverware Manchester City won during the 2018/2019 season, as all trophies were on display at the exclusive event.

STAR lager made the already remarkable evening, even extra special by giving out Man. City & STAR memorabilia to the guests in attendance.

STAR’s landmark partnership with the Citizens allows the brand to deliver evenings such as these, which gives fans the opportunity to get even closer to their favourite clubs.

Alongside Man. City, STAR Lager are also partners with some European football heavyweights such as PSG, Juventus, Real Madrid, Arsenal, Barcelona, and Chelsea.