Davido Lied! He Can’t Afford The Acquisition And Maintenance Of A Private Jet, See Why- Pas Chikero 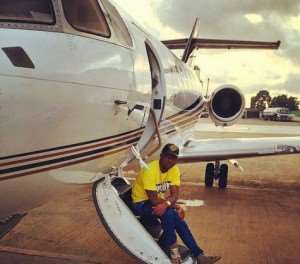 Davido Lied! He Can't Afford The Acquisition And Maintenance Of A Private Jet, See Why- Pas Chikero Nigerian Entertainers love to create hype with things that only exist in their minds.

Psquare once misled Nigerians to believing that they have a private jet only to later admit they didn't . David Adeleke a.k.a Davido is doing just the same.

He tweeted a photo of himself sitting OUTSIDE a private jet ,mind you not inside. saying: Now this jet can in no way belong to Davido because he doesn't make enough money to acquire and maintain a private jet.

First of all he doesn't make as much money as a John Mikel Obi makes yet Mikel doesn't have a private jet because buying a private jet is not the only expensive aspect, you need to spend good money annually to maintain and manage the iron bird.

Unless the jet belongs to Davido's father but Davido can't afford to have one. In fact there is no Nigerian Musician whose income is from just music can afford a private jet. This is why: After setting your account back to acquire a private jet, you start worrying about maintenance and management.

It is expensive to maintain a private jet, you will pay for hanger, pilot and crew, Insurance etc , obviously the expenses varies wildly, depending on the aircraft being used but roughly Pilots and Crew will cost around $500,000 per year.

They may be able to charter out the plane when not in use which will recoup some costs back.Training and Maintenance – this will add another $400,000 annually.Fuel Costs – Depends where you fly, but will cost at least $1,500 per hour. 400 hours would be $600,000.Catering – Add $10,000 for food and beverages (again there are no limits)Other Costs – Landing Fees, Airport taxes, Hangar rent, Weather Forecasting.

So operational costs would come to around $3 million per year and more for larger aircraft.

Davido definitely can't spend almost N400 million annually on private jet alone! He might not even muscle that out in a single cheque ! So why the deception Davido? Please don't build your career with lies. You are doing fine without the lies.

It is big enough if you were chartering it, lying that it belongs to you is ludicrous!

Nima Clashes: I ran for my life after hearing gunshots - Res...
31 minutes ago