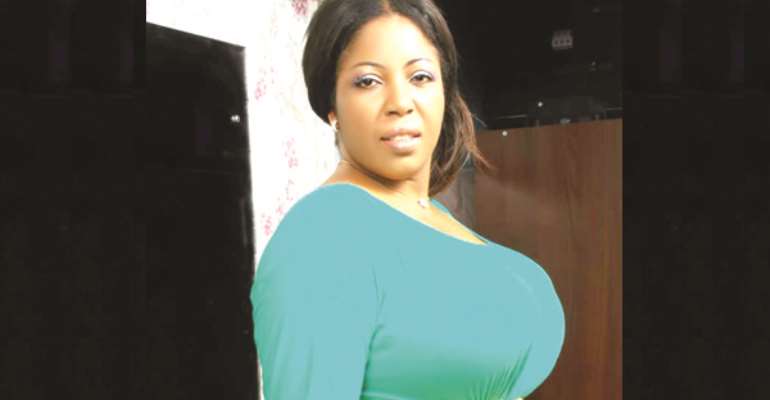 Four words that might correctly describe Nollywood actress, Chioma Toplis, would be big, bold, beautiful and confident; and these are largely hinged on her physical outlook and personality.

In the last 10 years, the actress has had her fair share of fame, controversies and of course, unforgettable moments.

In this piece, we will examine the hard facts in the life of this actress as well as her view on several facets of life.

•She has a plus-sized physique

•She is presently based in the UK

•In addition to acting, Chioma Toplis also has her arm in the business of owning and running a boutique

•Some of the movies she has been cast in include Deadly Friend, Proof of Life, Mad Ghost, Iran, Zara, Sincerity and a host of others

•Chioma Toplis is married to a Briton

•She considers herself an introvert despite her job as an actress

•Interestingly, Chioma Toplis presently involves herself in her business dealing much more than she does in acting

•At the moment, she only acts when her business schedule loosens up

•She no longer attends auditions

•She hopes that Nigeria will one day, produce a female president

•She is also into the business of interior decoration

•Her dressing has been a source of controversy for the actress

•She admits that she has had to cease wearing certain outfits as she is no longer as young as she once was. “I just want to be wearing clothes that suits my age.,” she once admitted

•She has cut down on the frequency of wearing mini-skirts

•She has been married for 19 years

•She does not consume alcoholic drinks

•The first thing her husband complimented about her was her dentition

•Shortly after her marriage, she had to relocate a lot but ceased movie when her children secured permanent schools in the UK

•She tames admirers by telling them she married

•She is the fourth child in her family

•Her husband hails from the United Kingdom

•She got married when she was 22 years old

•She studied English at Barking College in London

•For her beauty routine, she cleanses and moisturises her body regularly and applies her powder

•To a very large extent, Chioma Toplis has tamed her dressing and would for instance, only wear 'bum shorts' to the beach and not to a public function as she might have done in the past

Inside Politics: Political Quotes
Catch up with all the political quotes from our politicians.
Sponsored
More Nollywood Q&A
Modern Ghana Links
Tiwa Savage Gets Attention Of Another Woman's Husband
There is Nothing Wrong Having Celebs as Politicians………Bob Manuel Udokwu
Bubbles Magazine Describes Davido As ‘Near Legend’
“I Am Begging Nigerian Girls To Leave My Girlfriend Alone”---Mikel Obi
MISTRESS TEARS MOVIE DIRECTOR’S HOME APART
Are We Entertainers Socially Irresponsible - Etcetera
What's Wrong With This Picture?
Odunlade Adekola vs. Femi Adebayo: Who’s better?
Can You Spot What's Wrong With These Picture ...?
Election Reports Quotes Dossiers
TOP STORIES