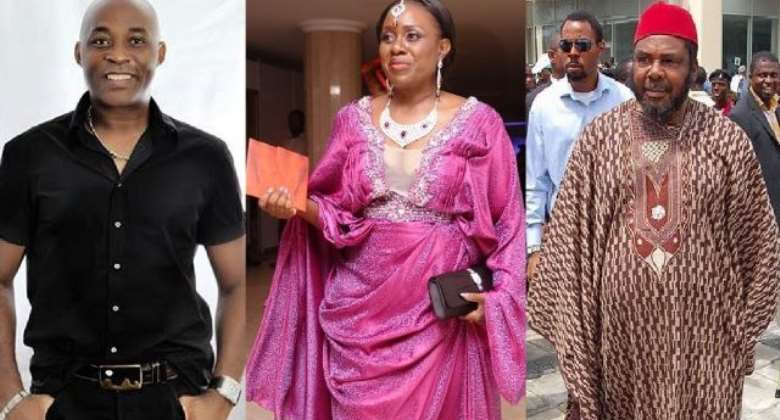 The movie industry in Nigeria aptly tagged; Nollywood is one of the top three leading motion picture industries in the world. Few weeks ago, Nollywood celebrated its 20 years of existence, though that is still being argued by some of its stakeholders who believe the industry is even older than Nigeria, which gained independence in 1960.

However, whether the industry is 20 or 60 years old, there are some major players in front of the camera who wield huge influences in the industry. These set of people shape and in some ways, dictate what goes on in this important sector of the entertainment industry in Nigeria.

Apart from being the popular faces most movie buffs see on their screens, these stars are in the forefront of some sharing formulas whenever there is a national cake to eat.
Not too long ago, a Governor of a South-South State in Nigeria gave the industry N50 million, some of these players were fully involved in allotting what goes to any group within the system. One of them even reportedly pocketed over N5 million from the spoils. That shows that bubble would burst if she is not carried along.

Here are some of the most influential Nollywood stars.

Joke Silva: This veteran actress has come a long way in the movie industry in Nigeria. Mama J, as she is fondly called by the younger generations in the film industry, has created a viable name and brand for herself. She is seen as a role model in Nollywood. Unfortunately, some of those who look up to her don't follow her good steps. If those who truly see her as a role model imitate her, Nollywood wouldn't be as scandalous as it is today. However, Joke Silva is a mother figure with a huge influence in the industry. She is very influential to the extent that when things turn upside down, they run to Mama J for advice. And like a true mother, Joke Silva calmly proffers solution to issues brought before her.

Ibinabo Fiberesima: Another actress that is very influential in Nollywood is Ibinabo Fiberesima. This ex-beauty queen is presently the President of Actors Guild of Nigeria (AGN). She is also the first female to occupy that exalted seat. Doing anything in the industry without informing her about it is like a foreign investor coming to Nigeria to set up a refinery without first seeing the President and the Petroleum Minister. Ibinabo wields that kind of big influence in Nollywood and she is mostly involved in matters that concern the industry, especially actors, whose interest she is representing. Some even believe that she has a full grip of Nollywood in her hands. Shortly after she was sworn in as Chairman of AGN, many forces rose against her in order to unseat her, but after spending a year in office, Ibinabo has remained stronger than before. This goes to show the power Ibinabo has in the industry, especially in the politics of AGN.

Omotola Jalade-Ekeinde is another powerful star in Nollywood. Before she joined the list of most influential 100 persons in the world according to TIME Magazine, Omosexy, as she is mostly called by her teeming fans, was powerful in Nollywood. She gained power when she became an international star after she was banned from acting in Nigeria by some marketers. Some of the marketers had thought that the mother of four would go into oblivion when she was banned, but she shook it off and proved the marketers wrong by clinching international movie deals. Now, Omotola is carried along in the industry when it comes to branding and using it to get favours from some influential people in the society. She has given the industry a better brand and value, which most stakeholders are very proud to be associated with.

Stephanie Okereke-Linus: When issues relating to the presidency are being sought, one of the first names that come to the minds amongst the industry stakeholders is that of Stephanie Okereke-Linus. She is regarded by some people as the best route to get to the 'father through the son'. Nobody in Nollywood ever jokes with Stephanie. Doing so would be to such person's detriment.

Genevieve Nnaji is another actress that has big influence in the film industry in Nigeria. She is one of the top stars in the continent and she was once described as the Julian Roberts of Africa. Genny, as some of her fans prefer to call her, is an influential star in Nollywood. Just like Stephanie, she also has influence in the Presidency. Recall that a purported fight broke out between her and Stephanie in 2011 over Presidency related matters. Some people started to reckon with her with respect. She went ahead, just like Omotola, to make a statement that with or without Nollywood, she is a hot cake in Africa. Her rumoured affair with a former vice-president also contributed to the respect some stakeholders have for the single mother of one.

Would this write up be complete and credible if the name of Pete Edochie is not mentioned in the list? Pete, apart from being a veteran and a legend in the game, is an icon that has much influence in Nollywood. He has transcended the fear and respect he commands in his movies into real life.

Olu Jacobs is another influential and powerful star in Nollywood. Just like his wife, Joke Silva, Olu Jacobs is a father figure to many Nollywood stars, who run to him when there is storm in the boat. His name also opens doors. The iconic role interpreter is also well respected because he has worked very hard to build a good name for himself. His name is never mentioned in controversial or dirty stories. Olu Jacobs is even respected outside the industry.

Segun Arinze became more powerful and influential during his reign as the President of AGN. Segun has also become politically strong in AGN. When it comes to decision making that concerns the industry, Segun is never found wanting. In fact, he is a key factor in happenings in Nollywood. The veteran actor is not new in the industry. He has seen it all having been in the game for a very long time.

Kanayo O Kanayo KOK, as he is fondly called, is another influential and powerful star in the Nigerian film industry. Some people refer him as a 'one man Mopol' because he could singlehandedly pull weight without the backing of others. His link with the Presidency is also working for him. Some months ago, he was one of those that dragged President Goodluck Jonathan to Lagos to have a dinner with the stakeholders in the industry. Also recently, he grabbed an appointment from Jonathan. Stepping on KOK's legs is like stamping on the tail of a cobra.

Richard Mofe Damijo is another very influential star in Nollywood. Even though he is no more very active in the industry like before, the present Commissioner in Delta State is still a big fish in the movie industry in Nigeria. Whenever there is any problem, many still run to him for help. He knows the right buttons to press to get what he wants. His name alone can withdraw cash from the 'bank'. His romance with politics has given huge power to his brand.