Covid-19: Media Is Indispensable In The Fight — Affail Monney 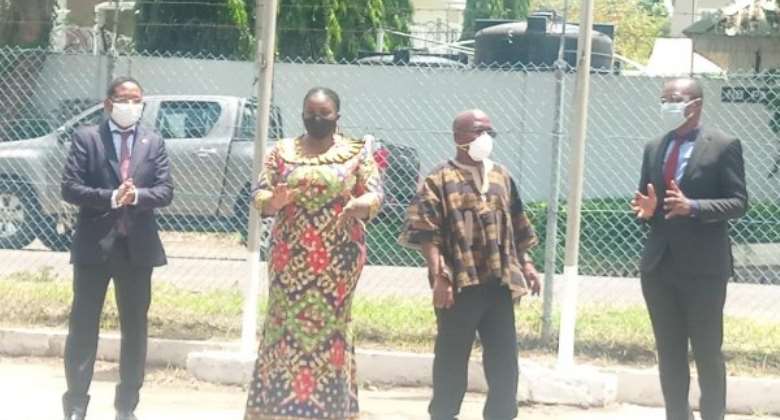 President of the Ghana Journalists Association Affail Monney said in an increasingly complex media landscape ignited by citizens' right to the use of social media, the importance of the traditional media and the need for an all absorbing attention to reliable and accurate information become more paramount.

“As the virus rages, we couldn't but agree more with UN Secretary General Antonio Guterres that “the second pandemic of misinformation from harmful health advice to wild conspiracy theories” that have unfortunately accompanied the global fight against the virus can only be waged effectively by the media with 'verified, scientific , fact-based news and analysis',” Mr Monney stated at a flagraising ceremony to mark World Press Freedom Day in Accra.

“While we all feel the devastating impact of the pandemic, UNESCO offers a glimmer of hope to the media. It says the unprecedented health crisis has the potential to rebuild trust in the profession.”

He intimate that the GJA intends to capitalize on this to strategize with its constituents and partners on how best to recalibrate and reinvigorate the post Covid-19 media system in Ghana.

The event, which was organised by the Ghana Journalists Association (GJA) in collaboration with the UNESCO, was on the “Journalism Without Fear or Favour'.

The annual celebration, which fell on Sunday, May 3rd, serves as an occasion to inform citizens of the violations of press freedom.

In 1993, the UN General Assembly proclaimed 3 May as World Press Freedom Day, following a recommendation adopted at the 26th session of UNESCO's General Conference in 1991.

Mr Monney noted that the theme for the event reinforces the point that journalism was not a profession for timid, timorous souls but one for brave and uncompromising characters.

He said this tough, indomitable streak enables some leading journalists to talk true to power, expose acts of corruption and hold the powerful to account; declaring that the GJA specially salutes such special stalwarts on this special Day.

“In the same vein, we take umbrage over the breezy disregard for ethical values by certain media men and women who are consumed with incontinent ego and surfeited with prideful arrogance,” he said.

“Press freedom is a liberty and not a license - liberty to perform and not license to destroy. The offenders must take note and repent.”

“The common thread which runs through our backsliding is impunity. Impunity, if not checked, ignites a self-propelling and re- energizing cycle which then becomes hellishly difficult to uproot,” Mr Monney said.

“A pesky call, therefore, goes to the authorities to deal surgically with the calcifying cancer of impunity by prosecuting and punishing, to the fullest extent within the law, perpetrators of attacks against journalists regardless of their material wealth, social status or political links.”

He said this was the least action expected in a country touted for its fidelity to the rule of law and not the rule of men.

He said the GJA further urges the government to give birth, with urgent promptitude, to the Monitoring Mechanism on the Safety of Journalists which had been incubating since last year.

He said even at the 30th position, Ghana's media system was well at the optimistic end of the spectrum- adjudged as satisfactory by global benchmark and outranking paragons of journalism like United States, the United Kingdom and France.

“This, however, should not give room for any narcotic feeling of complacency. Rather, we must take all steps and move all out to salvage our achievements in media freedom and functional democracy.”

Madam Nana Ama Dokua Asiamah-Adjei, a Deputy Minister of Information, hailed the impeccable role the media was playing in informing, educating and sensitizing the Ghanaians on the COVID-19 pandemic.

Mr Yaw Boadu Ayeboafoh, Chairman, National Media Commission, cautioned journalists not to allow themselves to be used as conduits for the propagation of fake news.

Mr Abdourahamane Diallo, UNESCO Country Representative to Ghana said: “UNESCO believes that a free and independent press is essential at all times, but is particularly important during a health crisis such as the one we are currently experiencing”.