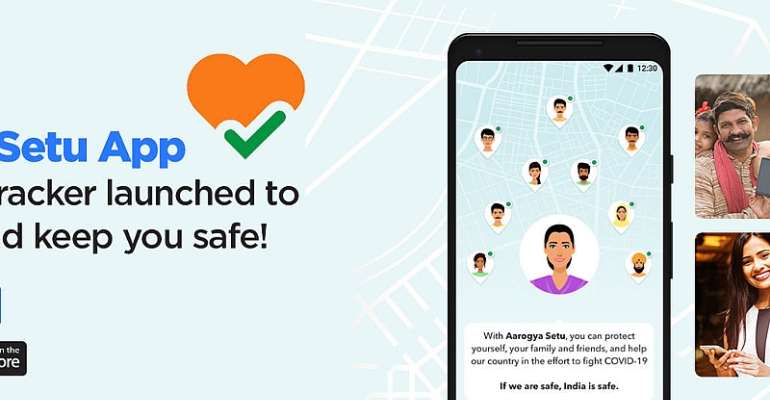 Authorities are using location-tracking on smart phones to identify possible Covid-19 infections or to keep people indoors. Campaigners fear it could mean lasting harm to privacy and digital rights.

Early this month the Indian government launched a coronavirus tracking app, two weeks after it created a WhatsApp chatbot – designed to provide citizens with information about the pandemic – which has so far been downloaded by 50 million people.

Better health through surveillance?
The new tracking app, called Aarogya Setu – which translates as “a bridge of health” - was launched by the Ministry of Electronics and Information Technology and created in partnership with private sector companies.

The Artificial Intelligence system behind it uses app users' mobile phone location and Bluetooth data to assess whether they've been within six feet of a person infected with Covid-19.

"If you come into contact with a Covid-19 positive patient you will get a notification through this app," says joint secretary of the health ministry, Lav Aggarwal.  He added that 100,000 people had downloaded the app on the day of its launch.

But the app has drawn criticism from privacy advocacy groups such as the Internet Freedom Foundation (IFF), which says the program has a systemic lack of auditability and transparency.

"We really don't know the technical architecture, its source codes and during a post lockdown era whether this is going to be an immunity passport. For now, there are insufficient details on how this app will protect privacy," Apar Gupta, executive director of IFF told RFI.

Though the government has promised to keep all data from its mobile apps confidential, digital activists are skeptical.

"Apart from the Aarogya Setu app, there are other apps as well that are launched by state governments. They don't define clearly what information will be collected, how it will be stored, and for what specific uses the government can access the data," Anil Chamadia, convenor Media Studies Group told RFI.

Owing to the rapid rise of Covid-19 cases across the country, state governments and large municipalities are coming up with strict surveillance mechanisms to ensure that those quarantined adhere to the norms, and stay at home.

Privacy worries
Several southern states like Karnataka and Telangana are deploying technology, including smartphone apps with geotagging features to ensure strict observance of home quarantine. In these states and metros, the apps are under development, or in some cases, already in use.

Karnataka, for instance, is about to launch a smartphone app, which would involve home quarantined cases to upload a selfie every half an hour. The “selfie” itself is geotagged and would be verified for its real-time nature.

Globally, geotagging and its use of has emerged as an important technological tool, as countries battle the lethal spread of Covid-19.

There are legitimate causes for concern as free speech campaigners believe that it is one thing for authorities to be given enough power to perform their role while too much power might be abused.

China, for example, launched a new "close contact detector" app that allowed people check their level of risk for catching the coronavirus. It tells users if they have been near someone who has been confirmed or suspected of having the virus.

The app was developed by government departments and the state-owned China Electronics Technology Group, using data collected by health and transport authorities.

"Such an app would not be possible without the Chinese government's pervasive, high-tech surveillance of its citizens. A national video camera network, facial recognition software, and artificial intelligence combine to ensure that anonymity is almost impossible," says a recent paper published by MIT Technology Review.

Activists fear that such apps which have been downloaded based on voluntary consent has the potential to be used as a tool to violate fundamental rights in the future.