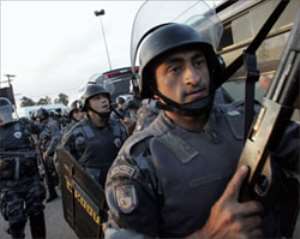 The authorities in Sao Paulo are investigating charges of police abuses and summary executions during last week's gang violence that killed about 170 people.

The inquiry in Brazil comes before a Thursday deadline by which police are supposed to hand over the names of alleged criminals who were killed in a massive crackdown in response to the violence.

Police blamed widespread violence between May 12 and May 18 on the First Capital Command gang, better known by its Portuguese initials, PCC.

Police said there were nearly 300 attacks as well as 73 riots in state jails during the six days.

Initially, police said they had killed 109 PCC members. But on Tuesday, that figure dropped to 79, according to state of Sao Paulo public security figures.

Of those, 62 died in the immediate police reaction to the attacks, while 17 others were killed in actions police described as "preventive".

Fifty-five of the dead have been identified, 49 of whom have a criminal background, the authorities say.

Another 31 people were killed in clashes with police unrelated to the PCC violence, they said.

A lawyer told the investigating legislators she did not give gang members advance word of the police decision to move PCC members.

Maria Cristina Rachado, who is representing Camacho, is accused by politicians and the media of passing on the information to her client.

The authorities say the violence started after gang members ordered attacks on police, enraged at plans to isolate imprisoned leaders who control many of Sao Paulo's teeming, notoriously corrupt prisons.

Rachado told a congressional hearing on Tuesday in the capital, Brasilia, she did not break the law by acquiring a tape of a supposedly secret May 10 congressional meeting in which police detailed their plans.

Rachado told the politicians she went with a sound technician to copy the tape but never heard its contents and gave it to Sergio Wesley da Cunha, another lawyer, for the gang.

"I didn't pass on information to anyone," said Rachado, who maintained she had not spoken to her client since March.

Da Cunha also denied wrongdoing, testifying later that he believed he had obtained the tape legally because the sound technician agreed to make the copy.

He listened to it but said he never revealed the contents to anyone.