One Month Ban On Public Gatherings Extended By Two Weeks 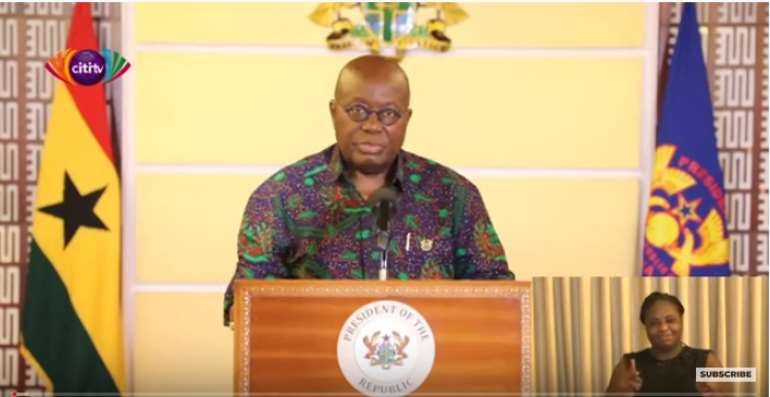 President Akufo-Addo has extended the initial one-month ban on public gatherings including religious activities and funerals by an additional two weeks.

The extension comes into full force after he signed the Executive Instrument to give effect to the new measure.

The Director of Communications at the presidency, Eugene Arhin said the extension takes effect from Monday, 13th April, 2020.

“President Akufo-Addo has signed the Executive Instrument (EI) extending the duration of the restrictions imposed under EI 64 and EI 65.

The restrictions imposed on public gatherings, under EI 64, have been extended for a further period of two (2) weeks, with effect from Monday 13th April, 2020,” Eugene Arhin said a Facebook post.

President Akufo-Addo on March 15, 2020 in a television broadcast declared the ban on all public gatherings including conferences, workshops, funerals, festivals, political rallies, church activities and other related events as part of measures to stop the spread of coronavirus in the country.

At the time, Ghana had recorded six cases of COVID-19.

The president in that broadcast gave a caveat that private burials were permitted however mourners present must not exceed 25.

“Private burials are permitted, but with limited numbers, not exceeding twenty-five (25) in attendance,” President Akufo-Addo said.

Already, schools have been shut down across the country. Most market places are open however under strict social-distancing protocols and the presence of handwashing facilities.

Some local assemblies have moved in to close markets where traders flout the social distancing directives. Other directives

Eugene Arhin reiterated the President’s directive for the restricted movement of persons within Accra, Tema and Kumasi to be extended by an additional week.

“As announced already, the restrictions imposed on the movement of persons in Accra, Tema, Kumasi and Kasoa, under EI 65, have been extended for a further period of one week with effect from Monday….All other provisions, including all exemptions in EI 64, and EI 65, are still in full force and effect,” he said.

Details of the president’s other directives as outlined in his March 2020 broadcast are as follows:

– The Government of Ghana's Travel Advisory issued earlier today should be observed as announced;

– Businesses and other workplaces can continue to operate, but should observe prescribed social distancing between patrons and staff;

– Establishments, such as supermarkets, shopping malls, restaurants, night clubs, hotels and drinking spots, should observe enhanced hygiene procedures by providing, amongst others, hand sanitizers, running water and soap for washing of hands;

– The Ministry of Transport should work with the transport unions and private and public transport operators to ensure enhanced hygienic conditions in all vehicles and terminals, by providing, amongst others, hand sanitizers, running water and soap for washing of hands; and

– The Ministry of Local Government and Rural Development should co-ordinate, with the Metropolitan, Municipal and District Assemblies, measures to enhance conditions of hygiene in markets across the country.

US revokes licence of top Chinese telecoms company
18 minutes ago