Was The Removal Of Professor Frimpong-Boateng As Head Of The Inter-Ministerial Committee On Illegal Mining A Huge Error Of Judgement? 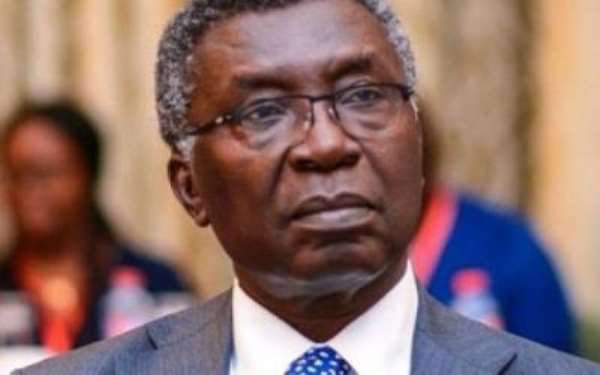 "The enormous challenges — but also the vast opportunities — of acting on climate change have distinguished the issue as the most pressing topic for the 50th anniversary. Climate change represents the biggest challenge to the future of humanity and the life-support systems that make our world habitable."

-- Earth Day Network.
As this year's Earth Day, Wednesday, 22 April, 2020, approaches, one can't help but lament over the lack of commitment on the part of so many members of our nation's political class, to the preservation of our nation's remaining forests, and halting the abominable abuse and destruction of ecosystems nationwide, by illegal gold miners, with such impunity.

In a sense, illegal gold miners actually pose a threat to public health in Ghana, because they poison our soils, streams, rivers and groundwater sources, with heavy metals and toxic chemicals - in addition to being potential morphed-rebel-force-warlords and myrmidon-foot-soldiers.

Across the length and breadth of Ghana, their unlawful activities increase the turbidity of increasingly heavily-polluted rivers, sourced by the Ghana Water Company (GWCL), for treating to supply potable water to the general public, through its pipeline distribution networks across the nation. Sometimes that turbidity even results in the shutting down of some of the GWCL's treatment plants.

At a time when we are fighting COVID-19, and ought to ensure that water flows through household taps across the nation, it is such an unfortunate development that the one member of President Akufo-Addo's government, with the strength of character, and moral courage, to face down galamsayers, has been made a sacrificial lamb: and removed from his position as the chairperson of the Inter-Ministerial Committee on Illegal Mining. Pity.

Alas, Professor Kwabena Frimpong-Boateng's removal, had been sought by those powerful and dishonest individuals in the ruling New Patriotic Party (NPP), who profit so mightily from illegal gold mining, from day one - right from the very moment he was appointed to head the Inter-Ministerial Committee on Illegal Mining, by President Akufo-Addo.

The plain and brutal truth is that the aforementioned NPP bigwigs profiting from galamsey, have always wanted the removal of the principled and honest stumbling-block, which Professor Kwabena Frimpong-Boateng (whose honesty was such an impediment to their greedy ambitions), represented. The sods.

I have never been ashamed to point out publicly, that although I loathe his party, I support President Akufo-Addo 100 percent, because of his commitment to preserving our natural heritage. However, the question we must all ponder over now is: Are we to believe the bush-telegraph anecdotal-story that President Akufo-Addo has become the Jubilee House prisoner, of a super-ruthless-mafia, who are now ruling our country by stealth, in his name, from behind the scenes? Hmmmm. Yooooo...

And, perchance, is it the case that while the President goes around the country, wowing highly-intelligent educated-illiterates with his posh accent, reading speeches written for him by cynical philistines, bad actors are in the meantime taking advantage of his absence, and doing bad things to our country, and presenting it as a fait accompli to the President, as some allege?

Perhaps it is all pure nonsense on bamboo stilts by conspiracy theorists, but an example such people often give, is the disconnect between the president's fine words in his speeches, about the health of our forests, which are invariably at variance with the true state of our natural capital - especially that of the all-important and critical (for the well-being of the millions who depend on its vital ecosystem services), Atewa Forest Reserve.

Sadly, the realities on the ground, as opposed to the nice words contained in President Akufo-Addo's speeches, make most decent folk cringe when they hear those presidential speeches.

That is because they are words that unfortunately make the President (a good and decent human being who actually cares about the natural environment unlike most Ghanaian politicians), appear unfairly to be a devious man, who speaks with a forked-tongue - and is allegedly an untruthful soul: judging by the ongoing brutal-gang-rape of Mother Nature, across Ghana.

That is why the removal of Professor Kwabena Frimpong-Boateng, as head of the Inter-Ministerial Committee On Illegal Mining, was such a huge error of judgement, on the part of the leader of the current regime in power, in Ghana, today. Pity. Hmmm, Oman Ghana, eyeasem ooooo - enti yewieye paaa enei? Asem kesie ebeba debi ankasa, ooooo. Yooooo... Hmmmm...