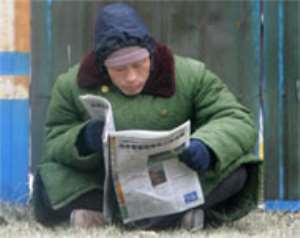 A Chinese journalist has been sentenced to 12 years in prison for subversion in the latest crackdown on the country's media.

Yang Tianshui was accused of posting articles on foreign websites, receiving money from abroad and helping an opposition party.

His lawyer said he did not plan to appeal as he felt the trial was illegal.

"We expected the result, but we are still dissatisfied because he is innocent," Li Jianqiang said.

The news comes as several other journalists in the country are facing prosecution for various offenses.

In Beijing on Tuesday, prosecutors filed a new indictment against a Chinese researcher for The New York Times newspaper who is accused of betraying state secrets.

Zhao Yan has been detained since 2004 and could face 10 years in prison.

Also in Beijing, four journalists working for local newspapers were arrested for investigating "irregularities" at state institutions and business and trying to extort money from them, China's official Xinhua news agency reported on Tuesday.

Two other journalists, one in Hunan province and the other in the southwestern Guizhou province, have also been charged with offenses including blackmail and extortion.

A prominent media rights group said on Tuesday that the Chinese government was on a campaign to clamp down on content deemed politically or morally dangerous from newspapers, websites and other media.

"Fearing that news of land disputes and other civil discontent could fuel a united threat to its authority, the government has undertaken one of the biggest media crackdowns since the aftermath of the 1989 Tiananmen Square pro-democracy demonstrations," the New York-based Committee to Protect Journalists said in a report on Tuesday.

Global media watchdog Reporters Without Borders says more than 30 journalists are imprisoned in the country.

NDC Prepared And Sprayed Concoction On NPP Agents At A Regis...
16 minutes ago

Dozens Of Ivorians Arrested For Participating In Voters’ Reg...
24 minutes ago