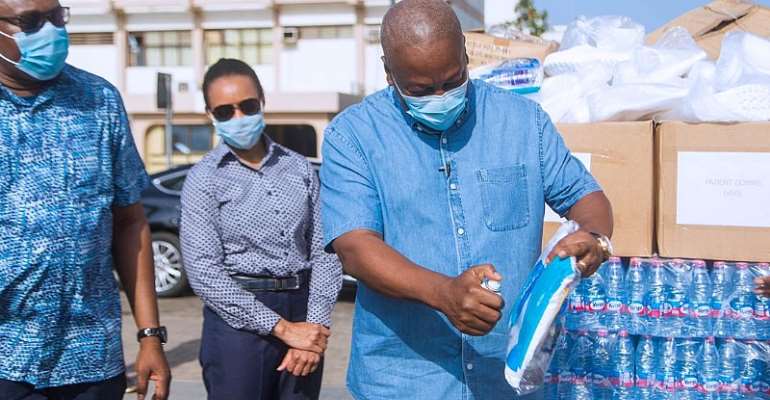 Former President John Dramani Mahama has today April 4, 2020, made donations to some regional and districts hospitals in the country to aid the COVID-19 fight.

The former President said he has made a total of 650 sets of Personal Protective Equipments (PPE’s) available to some selected health facilities in the country.

The PPEs include gumboots, sanitizers, face masks, gloves, headcovers, and several other critical equipment worth GHC390,000.

While commending frontline health workers in the country, the former President also called on the government to make sure that equipment needed by the workers are provided.

He said, “It isn’t a good thing that health workers across the country still do not have PPE’s because we didn’t plan early as a country and our importation of these items and test kits was also late also I must add that the demanded test kits and PPE’s have outstripped supply globally.”

Mr. John Mahama also announced that his office is also making arrangements to secure some additional 150 PPE’s to the Korlu-Bu Teaching Hospital because of threats from some health workers in respect of their protection.

“In view of the situation at Korle-Bu in particular and the treats from the health workers in respect of their own protection, I have had to make some adjustment in the distribution formula and we are currently working around to secure an additional 150 PPEs at an extra cost of GHC90,000 to reach out to other places in the region. This puts the total PPE’s we will be handing over to 650 sets at a total of GHC390,000,” he disclosed.

The Former President also called for immediate development of a National Infectious Disease Response Plan to help in the prevention of such diseases or quickly arrest them if they cross the shores of the nation to reduce its impacts.

“I propose an immediate development of a National Infectious Diseases Response plan that clearly sets out the specific steps that must be taken to prevent the entry of such diseases, quickly arrest them even if they do enter our shores at the very early stage to reduce its impacts on the bearest form on our population.”

“We must establish another medical research centre with capacity like the Noguchi Medical Research Institue in the northern part of Ghana.”

He further called for the immediate expansion of the 37 Military Hospital by doubling its current size to with an infectious centre to cater for the southern sector to help in the management of diseases like Ebola and COVID-19.

“We must expand the 37 Military Hospital by doubling the current bed size and also build an infectious disease centre to cater for the southern sector to help with the management of diseases like Ebola and COVID-19.”

He called for the establishment of a National Infectious Disease Centre to be built in the Middle and the Northern parts in the country.

The Former President also urged the government to expand both the Navorongo and Kimtampo Research Centres and ensure that Nugouchi or KCCR supports them to test more people in good time.

“I want to urge the government to expand the testing centres to include the Navorongo and Kimtampo Research Centres ensuring that Noguchi or the KCCR supports to test more people in good time.”

The presentation, according to Mr. Mahama, follows reports of a shortage of PPE and other materials required by the frontline medical personnel at the hospital in their fight against the coronavirus disease.