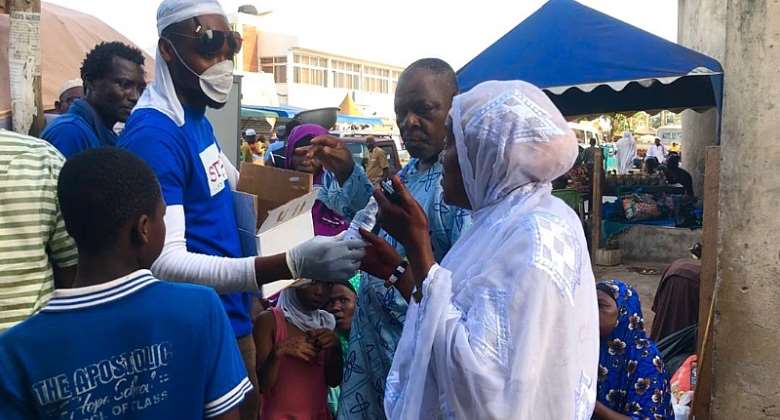 Yesterday, after the fantastic delivery by the Director of Police Operations, DCOP DR Sayibu Gariba Pabi at the Information Ministry on the preparedness of the Police as the lead Agency of the Joint Security Services Operation Coordinated by the National Security Code named -Ops Covid Safety - on the enforcement of the Presidential directives on the imposition of restrictions in Greater Accra and Greater Kumasi general areas;

A friend of mine called me immediately after the presser to find out from me the meaning of some of the security terminologies he(the Director of Police Operations, DCOP Dr. Sayibu Gariba Pabi) used during the press conference.

Notable among these security terminologies were; cordon (inner cordon and outer cordon) humanitarian operation (but not) a combat operation.

For the benefit of my friend and of course, those who follow me on all my social media handles to learn a thing or two on the basics in the Art and Science of Security from me, I will gracefully post my response to the questions here.

A Cordon - simply means, to prevent entry or exit of a person or group of persons mostly for the purposes of search by security officers in a given area intended to take control of illicit drugs, weapons, contraband goods etc.

The act of preventing people from getting out or coming into a particular place through the application of a certain measure of tactics or defenses is known as condoning off which basically means to prevent people from getting into (an area) by putting a line of people or objects around or in front.

For example, if you hear the police say they have "cordoned off" the streets and so on, then you should understand that, it is either something has happened ie, an accident or some form of criminality has been suspected at a particular place and they are taking steps necessary to prevent the untoward from happening. Or better still, they are taking steps to prevent surprises.

This goes to say that, if there is a "cordon, and the act of condoning off", then it goes without saying that there will be "inner and outer cordons" in the definition mix which essentially forms the fulcrum around which my friend's question oscillate -ie what inner or outer cordons meant as used by the Director of Police Operations in particular reference to the "humanitarian operation" currently ongoing to enforce the presidential directive on imposition of restrictions on the places aforementioned.

A humanitarian operation is based on a view that all human beings -Ghanaians- for that matter in these difficult times deserve respect and dignity and should be treated by the security agencies throughout the enforcement period as such.

Therefore, humanitarian operatives (the security agencies) should work towards advancing the well-being of Ghanaians as a whole. It is the antithesis of the "us vs. them" mentality that have always characterized most operations of this nature.

Unlike humanitarian operation, the opposite of which is known as "Combat operations"

A combat operation is a process is undertaken by armed security officers during major operations, battles, and engagements to facilitate the setting of objectives, direction of combat, and assessment of the operation plan's success.

Anyway, a little digression there, lets quickly go back to our cordon lesson. An inner cordon encloses the scene of an incident and contains any area of hazard or contamination. In this particular case, the inner cordons of Greater Accra and Greater Kumasi are the inner periphery or towns minus the outskirts.

So you may have heard the Director Ops saying that they are going to mount barriers at some vantage points in town (inner city) Such barriers form part of the inner cordon to aid the operation.

Then there is the "outer cordon" which is mainly mounted at the outskirts of town on major exit routes going outside of town to prevent people within the enclaves of Greater Accra and Greater Kumasi from leaving and or from coming having unhindered access to the general areas so specified under the restriction zones.

Now that we have understood what cordon, cordon off, inner and outer cordons mean, let's go a little further to include; "cordon and search"

Cordon and search is a security tactic or countermeasure if you like deployed to ward off or restrict access to an area for the purposes of conducting a search of premises for, contraband goods, movements, weapons, criminal gangs, terrorists or insurgents etcetera.

Maybe we can stop here and continue another day.

And oh, let's I forget, Greater Accra and Greater Kumasi in security communications parlance simply mean that Accra and its general areas or its suburbs, or its adjoining towns etcetera.

Now you can do your own permutations for the now popular Greater Kumasi so we can continue another time. In the meantime, please continue to stay home.

Stay safe wherever you are. God be with us all!