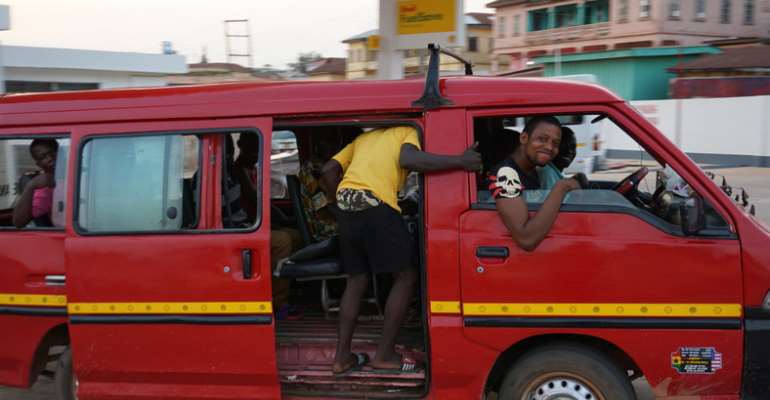 Determined to get out of the movement-restricted areas into other parts of the country, many travellers have resorted to unauthorised means to beat the roadblocks mounted at the various entry points, particularly in and out of Accra.

From trying to go for walks to pretending to walk a short distance within the community, they tried to get past the security, but luck ran out for many of them, as they were made to go back.

A few, though, were lucky and managed to get to the other side to continue their journey.

These were some of the observations the Daily Graphic team made on the first day of the stay-at-home measure to help curb the spread of the coronavirus disease (COVID-19) in the country.

The first day of the stay-at-home measure and restrictions on the movement of people was greeted with quietness in some communities and neighbourhoods, closed shops and silent and less busy roads, even in areas where traffic and busy human activities are usually brisk.

From the Daily Graphic’s observation, a number of travellers intending to leave Accra for Kumasi, for instance, boarded vehicles and got to as far as Medie in the Ga West municipality, where they got down and walked past the barrier and the tollbooth to the other side close to Nsawam to board another vehicle to continue to Kumasi.

At Ayi Mensah, a number of people also tried to beat the block by pretending to be going on a walk up the Akuapim Ridge were stopped by the police and made to go back.

A number of travellers who came from the Akwapim Ridge were, however, allowed to get to Accra after providing ID cards that indicated that they fell within the group of people exempted from the stay-at-home measure.

At some security check points mounted to ensure restriction on the movement of people, security men busily enforced the directive.

“Where are you going?” “Can’t you buy the medicine or foodstuffs in your area” and many other questions were posed by the security men to people who had moved out of the Awutu Senya East municipality into Accra via the Weija tollbooth.

There were about 17 security men, made up of 10 policemen and seven soldiers, at the Weija entry point.

They strictly enforced the directive for commercial vehicle drivers to reduce the number of passengers in their vehicles, in line with the social (physical) distancing protocol.

All commercial vehicles that had more than the prescribed number of passengers were stopped by the security men and some of the passengers asked to get down.

On the Adenta-Legon road, drivers of private cars were allowed to drive by without much probing from the police who were at the various traffic intersections.

In areas where people lived in flats or walled houses, most of them were found indoors, indicated by the cars parked at the car parks or on the compounds.

In some compound houses, some of the occupants were also indoors, with a few spotted within the compound going about their chores.

For heavily populated areas such as Old Fadama, CMB and Chorkor, however, many people were found outside their places of abode, some in groups and chatting.

At Kasoa, there was human activity at the market, but the Daily Graphic team observed that the area was not as busy as it usually was.

At some of the markets, some traders and porters, particularly in the food chain, took advantage of the exemption granted them to go out to do business.

Traders at the CMB and the Makola markets turned up for business, but some were disappointed because business was slow, with only a few buyers around to do business.

At the Kaneshie Market, a porter was spotted, with the explanation that he had decided to go to the market in order to continue his job of carrying people’s goods.

“Food sellers are still working and so they will need people to carry their goods. Also, the market is where I get my daily bread. I will starve if I stay at home,” the porter, who identified himself as Kwame, said.

It was also observed that although markets were operating to allow people purchase foodstuffs, the management of those markets had put in place strict measures to enforce the social (physical) distancing protocol.

At the Kaneshie Market, the management had implemented a system to alternate the days vendors would be allowed to sell.

When the Daily Graphic got to the market, the Managing Director of the Accra Markets Company Limited. Mr Edward Kofi Duffour, was explaining the alternate policy to poultry sellers.

He intimated the need for the market to implement the alternate system in order to reduce congestion.

“We are not in normal times and so things cannot be normal. It is better for you to stay alive and make money later than to die today,” he said.

The team also observed that in their determination to abide by the directive to stay at home following the restriction on movement, people who usually slept in front of closed shops had adopted ways to stay safe ‘at home’ too, despite their challenges.

They had used a huge polythene bag to cordon the frontage of the shops to give them some semblance of a home and the team spotted a number of them seeking refuge in those makeshift ‘homes’.

Those were the scenes in areas such as Abossey Okai, Zongo Junction and Flamingo, where many of the shops were swamped by homeless people who relaxed and chatted among themselves.

Some of the people who spoke to the Daily Graphic indicated that they usually went out during the day to earn a living and only returned to sleep in front of the shops.

“But as we have been told to stay at home, we have no choice but to be here. Thankfully, the shops will not be opened for the period and so we can also use the space,” a young man who did not want to give his name said.

In Kumasi, most of the streets were deserted. However, areas such as Ashtown, Asafo, Amakom and some of the densely populated areas had a few people sitting in front of their homes, visiting a public toilet facility or going to use public bathrooms.

In Kumasi, Daniel Kenu reports that it was a tale of two stories, as there was brisk business at the markets, while operators of food joints recorded poor patronage.

A number of people who were unable to shop over the weekend thronged the markets to purchase various items, with police assistance.

Indeed, the police were friendly as they monitored the situation to ensure that people did exactly what they said they were going to do.

More Headlines
ModernGhana Links
Medikal to spend night in police cell for brandishing gun
I wanna sleep in jail for this — says Shatta Wale whiles leaving Court room
Foreign Ministry officially announces death of Ghana's Ambassador to Italy
Akufo-Addo to launch "Operation Clean Your Frontage" campaign at Independence Square
Government is committed to resourcing the Office of the Special Prosecutor - Akufo-Addo
Handling LGBTQ+ issue in a correct manner will be a credit to Ghana’s democracy – Akufo-Addo
Komenda Sugar factory 'collapsed' under Mahama; if not, why didn’t they go for that $24 million for raw materials? – Akufo-Addo
Jesus Ahoufe remanded, to appear in court on Monday
LGBTQ+: I was impressed by intervention of very renowned, well-positioned people – Akufo-Addo
TOP STORIES