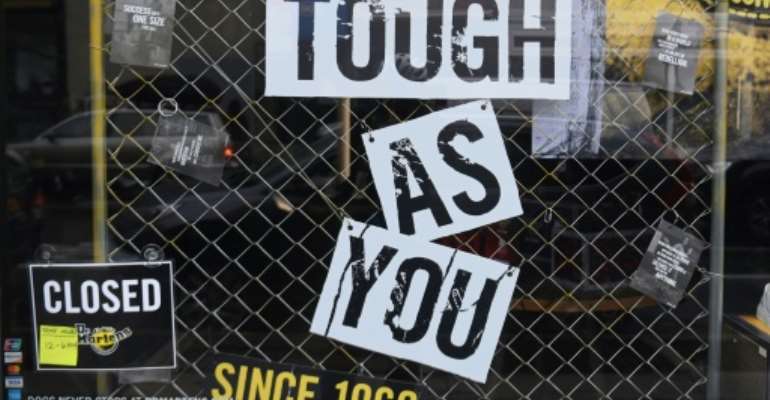 Window signage at a closed Dr. Martens store in the Brooklyn Borough of New York City. By Angela WEISS (AFP)

Layoffs, cutting costs and halting dividends... companies are scrambling to adapt as the coronavirus emergency hits demand and draconian measures taken to contain the illness undercut production and demand.

With the economic impact of COVID-19 threatening the survival of many firms, governments have pledged hundreds of billions to help them limp along -- or failing that, to bankroll outright rescues or nationalisation if necessary.

Here are some measures companies have taken:

Several industrial giants, in particular in the automobile industry, have reduced or even suspended production.

America's "Big Three" car makers -- General Motors, Fiat Chrysler and Ford -- will temporarily halt operations throughout North America through the end of the month, the companies said in conjunction with the auto workers union.

A man wearing a face mask walks past closed bars and restaurants in Marseille, southern France. By GERARD JULIEN (AFP)

Nissan suspended production at its Sunderland plant in northern England, the automaker's biggest plant in Europe, employing about 7,000 workers, and has also closed plants in Spain and Indonesia.

French giant Peugeot-Citroen is shutting down all production sites in Europe, and Italian-US carmaker Fiat Chrysler, with which it is in the process of merging, also intends to close most of its facilities on the continent, as does Ford.

Germany's VW is shuttering most European plants for two to three weeks.

BMW said Wednesday it is shutting down production in its European and South African plants for one month.

Renault is halting production at plants in France, Spain and Slovenia, as well as Romania, Portugal and Morocco.

Tyre giant Michelin is halting production in Spain, France and Italy for at least a week.

Airbus said it was suspending work at its French and Spanish plants for four days to improve workplace safety.

Workers leave FCA Chrysler Warren Truck Assembly after the three Detroit automakers agreed to UAW demands to shut down all North America plants as a precaution against coronavirus. By JEFF KOWALSKY (AFP)

High-end fashion giant Gucci, part of the Kering group, is closing all sites until March 20, while Hermes is shutting its manufacturing sites until the end of March.

A slew of American retailers have shut some or all of their outlets, including Nike, Macy's and Gap.

The iconic Saks Fifth Avenue flagship store in New York is closed, and Apple has shuttered all its stores outside China.

The situation is especially catastrophic for the travel industry, with US hotel giant Marriott shutting down some of its properties and furloughing tens of thousands of workers.

Airlines have been hit by a double-whammy: plunging demand and sweeping travel restrictions imposed by governments.

They have taken different measures to adapt.

Russia's Aeroflot has asked employees who have accumulated extra time off to use it.

Air France says it will look at reducing working hours, which several countries have facilitated with easier access to state benefits for workers now forced to go part-time.

Empty check-in counters are seen at the international terminal of Arlanda airport in Sweden. By Jonathan NACKSTRAND (AFP)

Low-cost airline Ryanair, which has announced "most if not all" of its flights from March 24 will be cancelled, said it is looking at a similar move, along with voluntary departures and temporarily suspending work contracts.

Forcing workers into unemployment temporarily is also an option several countries have made easier, with Volkswagen's Spanish subsidiary Seat also taking that course.

Italian shipyard Fincantieri, which has also halted output, has asked its workers to use their annual leave.

Air France-KLM, which is being forced to slash as many as 90 percent of flights, will reduce its planned investments for 2020 by 350 million euros ($380 million) and make 200 million euros in savings elsewhere as it seeks to ensure it has enough cash on hand.

Australian carrier Qantas said Thursday it will cut all international flights later this month, after the country's other main airline Virgin shut its overseas services.

Firms are not sparing shareholders from the pain either. Lufthansa, which is chopping up to 90 percent of flights, said it would not distribute a dividend from 2019 earnings.

Inditex, which owns clothing brand Zara among others, has also put off a decision on dividends from the 3.6 billion euros it earned in its 2019-2020 fiscal year, while making a provision of 287 million euros for the crisis.

Companies are not hesitating to take up offers of state support.

German tourism giant TUI, which employs 70,000 people worldwide and has suspended the "majority" of its operations, has made a request for state aid.

US airlines have asked for a $50-billion bailout and US planemaker Boeing is seeking at least $60 billion in federal support for the aerospace industry.

US authorities have also stepped in to prop up a key market where firms raise short-term funding and whose freezing up was threatening the finances of many companies.

The Italian government said it intends to renationalise the bankrupt former national carrier Alitalia under an emergency economic rescue plan.

Anti-gay bill : Tell foreign missions if they provoke us we'...
18 minutes ago