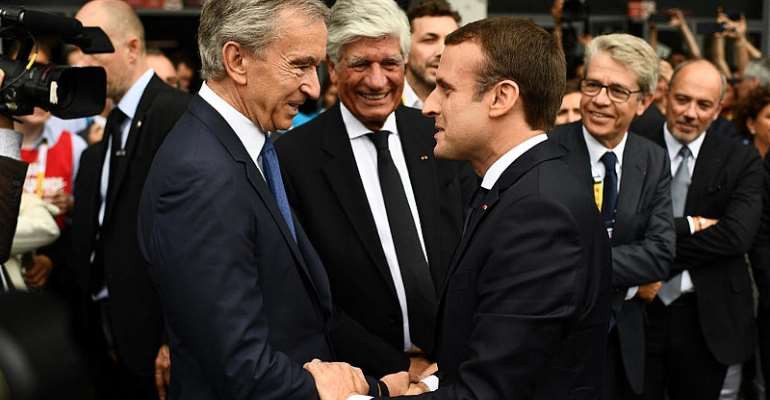 France has about forty billionaires, who mostly stay behind the scenes, accumulating wealth through business dealings, and wielding more power than they might let on. In a country with relatively low wealth disparity, the super-wealthy have managed to thrive.

Among France's billionaires is Bernard Arnault, the owner of LVMH, a conglomerate of luxury brands, who is sometimes the richest man in the world, depending on how the stock market is doing. France also produced the world's richest woman, Lilianne Bettencourt, the heiress of the L'Oreal fortune, who died in 2017.

France is home to fewer billionaires per capita than the United States and China, and in Europe, the UK, Italy and Germany have more, but the accumulated wealth of French billionaires is higher. The richest French are richer than their European counterparts.

A study on European billionaires released recently by the European Network of Corporate Observatories reveals the different ways that people have managed to amass and keep wealth across the continent.

Olivier Petitjean, of the French Observatoire des Multinationales, researched the French billionaires, and found strong connections between wealth and power in France.

RFI: France has the image of being very egalitarian, and it has imposed high taxes on wealthy individuals. What about France has enabled these billionaires to amass wealth?

Olivier Petitjean: When you look at equality indexes, France is still more equal than some other countries. But what's interesting is that there are more wealthy billionaires in France than in other countries in Europe. I suppose you could say there's a sort of French hypocrisy in the way that we like to project the image of being egalitarian.

When you look at the tax issues, there are a lot of niches that allow rich people like that to pay fewer taxes.

RFI: Former president, Francois Hollande, a Socialist, had proposed a 75 percent tax on incomes of a million or more. It was not implemented, but it caused a stir….

OP: It was very symbolic. And then when Emmanuel Macron was elected, one of the first things is he did was to eliminate the wealth tax, which is also very symbolic.

There's a long history of the French Republic and the French elites working either together or against each other. That dates back, probably, to the French Revolution, when all the aristocrats went away. It's played out repeatedly. There are times where the egalitarian spirit reasserts itself.

At the moment we have a very business-friendly government, but also a government that doesn't have as much money to spend. So the role of the wealthy is coming back with a bang.

It's been almost a year since the Notre Dame fire. A lot of those wealthy Frenchmen pledged a lot of money, nearly a billion, to rebuild the cathedral. And there was a backlash, first because it was a symbol of the fact that the government didn't have the money. Also, the big issue was the tax breaks they were getting on their donations.

RFI: France does not have a tradition of donations from individuals to charities or cultural institutions, though there seems to be a growing trend in corporate sponsorships…

OP: It's definitely growing. The law on donations was passed in 2003, which created write-offs of up to 66 per cent of what is donated.

And at the same time, there's been a movement of decreasing public budgets. So I would say it's become more important for cultural institutions to seek donations, though most individuals channel them through their corporate foundations, probably because there's a bit of a shyness from individual rich people.

There is also a disturbing pattern of EU subsidies that have been lavished indiscriminately on Eastern European countries, and the governments tend to give it to friends. So it creates this new wealth based on EU subsidies.

But in general, compared, for instance, to US billionaires, European billionaires don't have as much as a political commitment. But digging a bit deeper, we find that actually a lot of them are involved in politics, sometimes in indirect ways.

RFI: What is the relationship between wealth and power and politics in France? A lot of wealthy people own newspapers. And there are some wealthy people who are directly involved in politics, like Serge Dassault, a billionaire (who died in 2018), at the head of a massive aviation company, who was elected to parliament…

OP: Most of the French media is owned by a handful of billionaires, or corporations connected to billionaires. Bernard Arnault owns the main economic daily, Les Echos. The Pinault family, the other luxury group, owns Le Point. And when you look at those headlines, they're really political.

And there's also a history of connections between wealthy people and political leaders. It was very obvious when Nicolas Sarkozy was president. When he got elected in 2007, he celebrated with a famous dinner at the Fouquet's, with all the richest people in France.

The relationship still exists today, even if it's more discreet, as there is still strong resistance in the French public ethos about the power of the wealthy, with a culture of saying that money is not everything.

RFI: Even though so much of the conversation in politics is purchasing power. The Yellow Vest movement was not about money, per se, but it was about inequality. Money is there. It's just not as overtly talked about, maybe?

OP: There's a sort of still a slight taboo about seeking money just for seeking money. I suppose you see that in other countries, but it's still it's particularly strong in France.

But the situation in France is very volatile. At the beginning of Emmanuel Macron's mandate, there was really a moment, a bit like at the beginning of Nicolas Sarkozy's presidency, of saying, 'Wealth is good, let's be more business friendly'.

Now, because of the Yellow Vests and Macron's general unpopularity, he's toned down that rhetoric. He's more on the defensive than he was.

But it could swing back. We don't know what's going to happen politically in two years. Either we're going to see somebody elected who will reinstitute taxes on billionaires and get rid of tax breaks on donations. Or we could see a billionaire run for office as we've seen in other countries. I'm not sure which one we might have!