On The EVD Frontline In West Africa, How The Communities Can Combat COVID-19 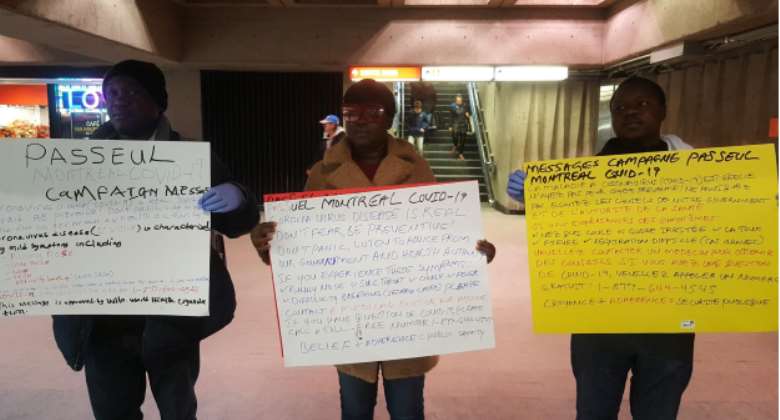 On last Wednesday, March 11, 2020, was stunned with grievous news released by the World Health Organization (WHO). It's announced by WHO that the Coronavirus Disease is a pandemic threatening global health and peace. Countries gathered considering this flare-up, amongst all were the responses from the two giants in North America: The great United States of America and Canada. Residents and Citizens from these two closed-bordered countries remained keen to update their respective governments and health authorities on the appropriate response strategies to combat this global epidemic; Coronavirus 2019.

Early Friday morning of March 13, 2020, news of the virus has stretched into the two highest offices. The wife of the Canadian Prime Minister, Madam Sophie Trudeau is down positive with the virus. On the other hand, President Trump in closed consultations with his medical team willingly subjected himself to the COVID-19 test. For Pres Trump, the result was later released negatively while his counterpart, Prime Minister Justin Trudeau will isolate himself for 14 days. At noon, we're all ears impatiently waiting and yearning for hopes and ways forward. As we wait, numbers of both suspected and confirmed cases and deaths keep rising globally and in countries. In fewer hours, both governments reassured citizens and residents of its willingness and capabilities of tackling the pandemic. The US and Canada have made immediately available funds in 50B and 10B as response packages to combat the pandemic.

What stood apart to me more than anything was absolute exhibit of solid authority and readiness to resolve the health crisis at hand. Both countries like some in Europe, have declared health emergencies involving several dos and don'ts. The World Health Organization has pointed out that one of the lessons learned from the Ebola Virus Disease (EVD) in West Africa is that disease outbreaks often move faster than the money allocated to respond to them. Most recent updates from the WHO website, shows how the virus is fast spreading across the globe with more than 168,000 confirmed cases and 6,610 deaths with the two North American giants (US & Canada) at 1,648 and 244. Experts have predicted an increase in days ahead. Although both nations have shown ‘fiscal power fire’ to begin to fight the outbreaks, the pondering question is, are these funds enough alone to tackle the pandemic? No, like Newton’s third law, funds must be coordinated with appropriate response strategies highly community driven.

Health is a “fundamental resource to the individual, the community and to society” (Kickbusch, 1989: 13). Communication and collaboration among various sectors of the community should remain cardinal during a health crisis. Community collaborations include coalitions, partnerships, community advisory boards, advocacy groups, and nonprofit organizations. The communities must claim the response strategies as diseases don’t discriminate across cultures, race or status- no person or community is completely safe unless all are safe. The communities must partner with the health authorities and play lead during these difficult times. Both WHO and the CDC have researched and concluded that the solutions for assuring population health are not owned by governmental public health agencies; they can be found in communities and in community organizations and partnerships. Community is the bedrock of public health. If the world must fast defeat this novel coronavirus disease, she must tailor response strategies with community engagements and collaborations.

On the EVD frontline in West Africa:
In 2014, during the peak of the Ebola Outbreaks in West Africa, I took an offer to lead the operations team of Africare Bong in Liberia. It’s a daunting task to work during this health crisis, especially as a non-medical practitioner who was just from college. The first day of assignment, was greeted by shocking news of the infection of one of the lead doctors of Phebe Hospital; infected and rushed to the ETU for isolation and treatment. On that day, we both crossed paths along the highway; an experienced and brave General is surrendering the frontline and a Reserved Officer is going on the frontline. What a day!

In the first week of field service, the nation was hit hard, infections in the thousands and deaths in the hundreds. Medical practitioners were badly hit along with their families, relatives and mostly people they encountered. From the onset, had the government under President Sirleaf stood her grounds above the politics of the day, our nation wouldn’t have suffered much especially when it’s possible to quarantine and reduce risk from its first case in Lofa County (March 2014).

Few months later, the President declared a national emergency terming the EVD as a threat to the nation and requested support from partners, especially foreign counterparts. Unlike the West and most developed nations, Africa is extremely vulnerable to these global health crises with poor infrastructures and limited capacities to withstand external shocks. The US, our traditional partner and other strategic partners stepped in with both financial and technical support. To safely say, the globe was brought down on the Mano River Countries: Liberia, Sierra Leone and Guinea.

As days go by, the government of Liberia along with the partners operating in Liberia led the response agenda to robustly tackle the deadly Ebola Virus. Like done now, the Incidence Management Team led by Tolbert Nyenswah, who is now widely known as Ebola Hero among Liberians took radical measures to combat the disease. The strategies met conspiracy theories as many citizens mainly out of ignorance and some of politics. Daily Observer, one of the country’s oldest newspapers, published an article claiming that Ebola and the AIDS Virus are genetically modified organisms to be used as bioweapons on Africans to reduce Africa’s population. This went viral on social media with many conflicting narrations: "Some members of the community thought it was a bad spirit, a devil or poisoning." The Response team had many briefings and readjusted strategies to fully incorporate communities to take full ownership of the management of the crisis.

In the field in Bong, I saw commitment and joint efforts from the communities led by its local leaders. Two groups that stood out most were, the General Volunteer Health Workers (GCHVs) and the Trained Traditional Midwives (TTMs). Both local health groups offered their voluntary services and played lead roles in educating the communities on effects and preventive measures. In one Town closed to Guinea, Jowah, I witnessed the community volunteers screening at their self-erected checkpoint. They had a bush rope at the entrance, buckets full of disinfectants and a thermometer measuring temp of visitors and dwellers entering town. “We check everybody and keep surveillance on strangers entering our town” one of the town’s guides said. Our work as lead partner to the Bong County Health Team (BCHT) became less involved as the communities continued showing responsibility of the health crisis adhering to restrictions and preventive measures. Like Bong, many counties in Liberia employed the same measures and received overwhelming support from the communities.

Conspiracy theory so far in the West:
Like West Africa, the West is not excluded from these conspiracy theories amongst its residents and citizens. Last Friday, I had cross-exchanges with few people in North America who held strong views that COVID-19 designed in China by the US to lessen its worldwide importance, mostly its economy so as to permit the US to keep up world superpower. Sadly, few holding these views are members of our communities with great influences on some people in their circles. To dispel this conspiracy, the community must exercise leadership and take ownership of their health management. Increasing awareness at all fronts must remain cardinal and sharing public health governance with the community.

The little that matters most:
The world must take cue from West Africa and share public health governance with the communities. I admired most last Monday, March 16, 2020 when the Governor of Kentucky, Gov. Beshear motivate people, when they do great, help others and do their part in engaging the virus, to post about them on social media using the hashtags #TeamKentucky and #TogetherKy. “Let’s start spreading good news. We need it. At times like this, when we can share good things we are doing, it lifts us all up,” he said. No better call than inclusive supports and collaborative engagements. Against this backdrop, on Saturday, March 14, I joined a local community service group in Montreal to raise awareness and share preventive messages with users at three major metro stations (Honore-beaugrand, Berri UQAM and McGill). Our team was highly appreciated as people read the posters and fliers and regain trust and ownership of their health management.

In crisis management, the worst thing to do is to assume people know when people truly don't know. Don't assume people know until you know people know. We encourage residents of the world to heighten the awareness and adhere to measures employed by statutory health authorities. Lessons from Ebola allows decentralized health management to encompass communication, information sharing, and straightforwardness. Let’s increase the awareness up till the last is retested negative of COVID-19.

Our world will be saved once more and together we'll triumph over this foe, COVID-19.

Sam can be reached at [email protected]