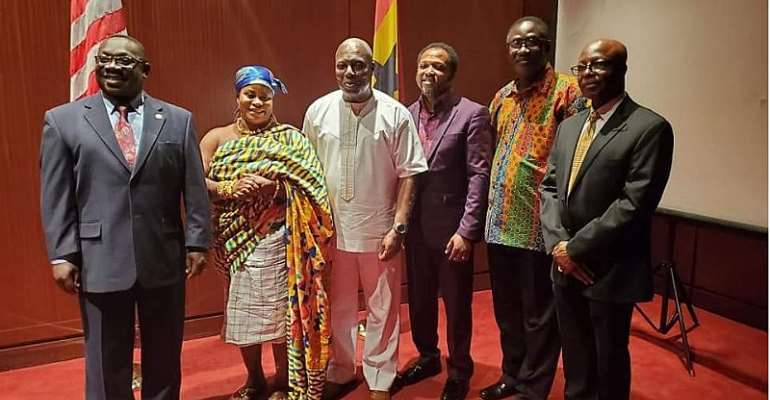 On Thursday, March 5th, Mr. Charles Nimmo Ntiamoah Mensah aka (Mr. CNN) CEO\Publisher of 3G Magazine and entrepreneur accompanied by a high powered delegation of US-based media practitioners, an industrialist, a traditional queen mother and philanthropist in the United States paid a courtesy call on the Ambassador of Ghana to the USA, H.E Baffour Adjei Bawuah.

The purpose of the visit was among others to congratulate Ghana on their 63rd Independence Anniversary, appreciate the Honorable Ambassador for his exemplary service in the US and also to officially inform him of the 20th anniversary of Mr. CNN's service in the media and showbiz industry which will be celebrated with various activities in the United States. Mr. CNN is planning a triple celebration of his success code named 20.12.10 representing 20 years in the media and showbiz industry, 12 years of publishing 3G magazine, and 10 years of organizing the 3G media Awards.

In appreciation of the Ambassador's service, the delegation presented him a photo album as well as a Life time achievement award from 3G Media a US based media conglomerate.

This came as a surprise to the Ambassador who expressed his profound appreciation to the delegation and commended them for the support and commitment to promoting Ghana in the diaspora.

On Behalf of the Ambassador Mr. Bernard Kwame Acquah , first Secretary (Political) at the Embassy also expressed the Embassy's gratitude to media personnel and applauded their continues engagement with the Embassy as it has proven to be beneficial to the Ghanaian community. Members of the delegation were Obaahemaa Nana Nkrumah Adasa III-Queen mother of Nkawie Abofrem, Mr. Isaac Kusi of Krismark a US based Industrial company, Mr. Frederick Nnoma Addision; President and CEO of AMIP News and Mr. George Kwasi Bright, Editor and Publisher of the Afrikan Post.