The Lamentations Of Muammar Qadhafi 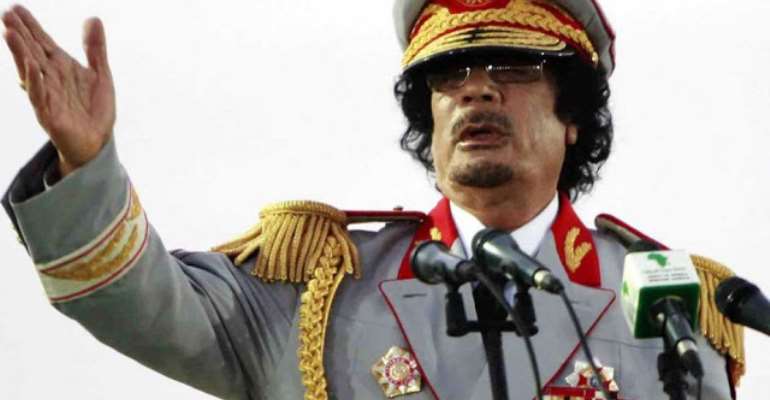 On October 20, 2011, people around the world watched on their screens the images of a bloody man who was lynched by a hysterical crowd. A few moments later, two swollen bodies lying next to each other, on dirty mattresses placed on the floor were also shown to the world. The bodies were the Libyan leader, Muammar Qadhafi and his son Al-Mu'tasim-Billah al-Qadhafi.

The event marks the end of a bombing campaign against Libya by NATO forces and the ground battles of their occasional allies, the Libyan revolutionaries, who it will later turn out to be were fundamentalists and jihadists but the West - Paris, London, Brussels, and even the UN Secretary-General welcome the new era of Libya.

Why Africa is never allowed to grow despite all the resources on this big continent? Qadhafi was described as a megalomaniac and bloodthirsty dictator, whose relatives were enriched by diverting the country's oil wealth to the detriment of the Libyan people. He was also accused as a sponsor of international terrorism.

This is what the world was forced to believe about Qadhafi, described to be a monster and Qadha the reasons for the fatal war that the NATO powers have to wage against his country.

Do we have to believe the US government, NATO forces and its allies that Saddam Hussein had weapons of mass destruction, yet when the Iraqi leader was captured and killed, nothing was found?

Well, it is now part of world history that George W. Bush and former British Prime Minister, Tony Blair were the two biggest liars and friends.

However, before the death of Muammar Qadhafi, on April 5, 2011, in Tripoli, Muammar Qadhafi poured out these emotional words, I prefer to call it ‘The Lamentations Of Qadhafi.” :

For 40 years, or perhaps more, I have done all I can to give the people homes, hospitals, schools and when they were hungry, I gave them food. I transformed Benghazi from a desert into fertile land, I resisted the attacks of the cowboy Reagan when trying to kill me, he killed an orphan, my adopted daughter, a poor innocent child.

I have helped my African brothers and sisters with money for the African Union. I have done everything to help the people understand the concept of true democracy, in which the popular committees govern our country.

For some, this was never enough, people who had 10-room houses, rich clothing, and furniture. Selfish as they are, they asked for more at the expense of others, they were always dissatisfied and told the Americans and other visitors that they wanted democracy and freedom.

They did not want to realize that it is a cutthroat system, where the biggest dog devours everything. They were enchanted by these words, not realizing that in the USA there were no free medicines, free hospitals, free houses, free education, and guaranteed food.

For them, nothing I did was enough, but for the others, I was the son of Gamal Abdel Nasser, the only true Arab and Muslim leader we had since Saladin, a man who returned the Suez Canal to his people as I have Libya claimed for my people.

It was his footsteps that I tried to follow, to keep my people free from colonial rule, from the raiders who would like to rob us. Now I am under attack from the greatest military force in history.

My little African son, Obama, wants to kill me, take away our country's freedom, our free homes, our free medicine, our free education, our safe food, and replace it with the US-style thief called capitalism. But we all in the Third World know what that means. It means that businesses govern countries, the world and that people suffer.

So there is no alternative for me, I have to resist and, if Allah wills, I will die following the way, the way that has enriched our country with fertile fields, food, health and has even allowed us to help our African and Arab brothers to work here with us in Libyan Jamahiriya.

I don't want to die, but if I had to get there, to save this land, my people, the thousands of my children, then it may be. Let this testament be my voice to the world, say that I opposed the attacks of the NATO crusaders, cruelty, betrayal, the West and its colonialist ambitions, that I resisted together with my African brothers, my real Arab and Muslim brothers.

I tried to shed some light when buildings were being built elsewhere; I lived in a modest house and tent. I have never forgotten my youth in Sirte, I have not wasted our national wealth and like Saladin, our great Muslim leader who saved Jerusalem for Islam, I took little for myself ...

In the West, someone called me crazy and insane. They know the truth, but continue to lie. They know that our land is independent and free, not subject to colonialism. They know that my vision and my path have always been honest and in the interest of my people. They know that I will fight to the last breath to keep us free. God help us.

Six months after pouring out this lamentation, Qadhafi was captured and brutally murdered. Libya is now in ruins, IS jihadists resist in the city, while a good part of the Libyan population is facing chaos and regrets.

In life, you will only miss your water when your well runs dry. This is a lesson to all African leaders easily deceived by the developed world. We are never loved because of the colour of our skin but loved because of what they get from Africa

Be strong — Isaac Adongo consoles Bawumia with a cow for mot...
51 minutes ago