By RFI with Anne-Marie Bissada
Canada 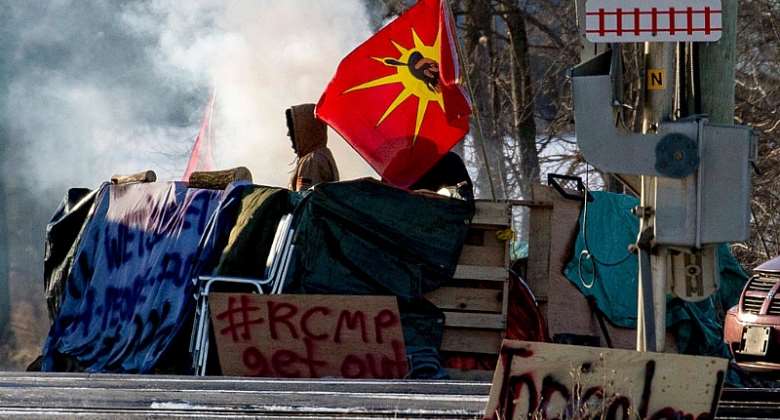 Canada's Prime Minister held an urgent meeting with his cabinet in Ottawa as the Indigenous-led rail blockades hit the two-week mark on Thursday.

Rail protests sprung across the country in response to the arrest by the Royal Canadian Mounted Police (RCMP) of protestors in Wet'suwet'en territory in the western province of northern British Columbia.

The RCMP was enforcing a court injunction to end a protest that was blocking the construction of the controversial Coastal GasLink natural gas pipeline.

Pipeline project
Tensions have been escalating since 31 December 2019 when the B.C. Supreme Court granted Coastal GasLink an expanded injunction against the Wet'suwet'en Nation members who were blocking access to the project.

That in turn has prompted numerous solidarity protests across the country, with protesters blocking access to rain lines, legislatures and port entries.

The project at stake is the 4.6 billion euro pipeline that would carry natural gas across northern B.C. On its website, Coastal GasLink says the proposed route was determined in “valuing the culture, lands and traditions of the Indigenous groups.”

It adds that its team have over “15,000 interactions and engagements with Indigenous groups…so the project can be designed, constructed and operated in a safe and environmentally responsible way.”

Heart of the problem
Indigenous communities across the country have supported the protests that they deem are not anti-pipeline, but more about aboriginal rights over territory.

In the case of the Wet'suwet'en Nation, the Canadian government had previously recognized that all of the land in the country was originally owned by Indigenous people.

That means before the federal government can make claims to the land, it has to take ownership of it.

In this case, the Wet'suwet'en Nation had never given up its Aboriginal title, or in other words, its inherent right to the land.

Speaking to CTV news, Brenda Gunn, an associate professor of law at the University of Manitoba says the Wet'suwet'en Nation “have always claimed the land in question.”

From their perspective, no action had been taken to remove their jurisdiction over the land.

The pipeline company may have received permission from Wet'suwet'un elected councils to build the pipeline, but it failed to get it from the hereditary chiefs who say they never agreed to give up that jurisdiction over their land.

Hereditary chiefs are a traditional form of Indigenous governance that were in existence before the arrival of colonizers.

Blockades and economy
Camps have been blocking access to the pipeline's worksite. But following the RCMP's enforced court order to clear the camps, the protest have gone national.

Railroads have been blocked all across the country as a form of protest.

"We're working very hard to end the blockades. It's an unacceptable situation," the prime minister said ahead of the meeting with his cabinet on Thursday.

He added that his government however will not issue an ultimatum to remove the blockades.

Meanwhile the passenger rail company, Via Rail, announced nearly 1000 layoffs on Wednesday due to the cross-country blockade. The national freight carrier, CN Rail has also issued possible layoffs to some 450 workers.

The continued blocking of all rain lines is starting to have negative impact on the national economy, while the province of Alberta – which relies on gas and oil for financing – has been much more critical of the protests.

“This is not about Indigenous people. It's not about carbon emissions,” said Jason Kenney, the Alberta premiers. “It's about a hard-left ideology that is, frankly, opposed to the entire modern industrial economy. “It's about time that our police services demonstrated that this is a country that respects the rule of law.”