French protesters back on streets as pension reform debate rumbles on 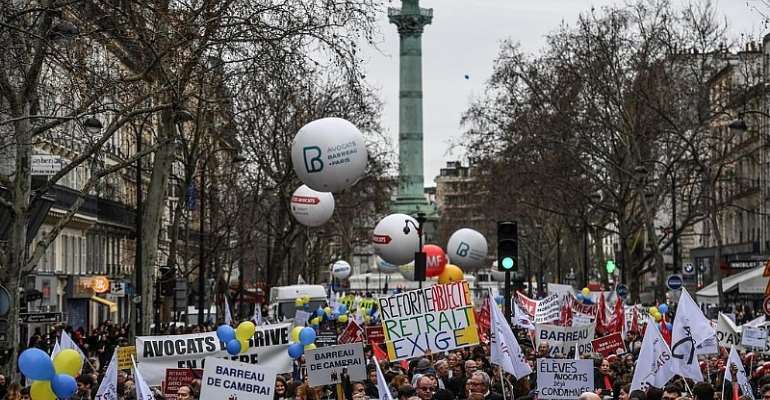 Opponents of the French government's pension reform returned to the streets of France on Thursday in a fresh bid to force President Emmanuel Macron to ditch the overhaul of the country's pension system, despite falling numbers.

Thursday sees the latest episode in France's rumbling strike action, with demonstrations planned in several cities, including the capital.

In Paris, the march kicked off at 13H30 local time at Gare de l'Est in the east of the city and headed towards place de la Nation further south.

The motivation of the protesters remains the same. They want the government to scrap "an unfair and dangerous project," which has become the leitmotiv of the five left unions behind Thursday's industrial action.

The last interprofessional strike on 30 January mobilised 108,000 people in France according to the interior ministry, far less than the 249,000 protesters that took to the streets the week before.

Ongoing mess
With their large-scale actions petering out, unions are increasingly resorting to wildcat actions to cause disruption.

Rubbish has been piling up on sidewalks in several parts of Paris after days of blockades at the city's incineration plants.

The hardline CGT union was due to hold talks with its allies after the protests to decide whether to continue their industrial action. Some of its members walked out on the job, forcing the Eiffel Tower to close.

Earlier this week, the contested draft law reached parliament, where it is already undergoing 22,000 amendments.

Union leaders know that they have now or never to force the government to back down.

On 17 February, the reform bill will be subject to debate in Parliament where Macron's Republic on the Move party holds a majority and is widely expected to push through the overhaul by summer.

Europe
Powered By Modern Ghana
Death toll in Nigeria jihadist attack rises to 30
Halep celebrates birthday with win under the centre court roof at French Open
Sinner sails under the roof as Azarenka rails in the rain at French Open
Public in France in favour of new lockdown as trust in government dips
Last orders in French southern city of Marseille as bars to close to stop Covid spread
Lesotho: Soldiers arrested for murder of controversial Chinese doctor
France beefs up security for Jewish holiday in wake of Paris knife attack
France could be 'overwhelmed' by second Covid-19 wave
Paris to unveil first public statue to a black woman who challenged slavery
COVID-19 Updates Live Dashboard
TOP STORIES