The Missing Excavators & The Arrest of The 'Artful Dodger' 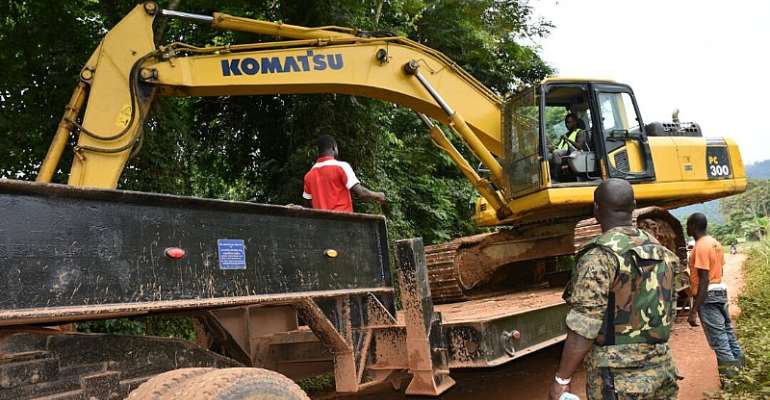 Hello 'Massa' Asomasi, thanks but no thanks. The mission-- 'Operation Vanguard' seemed accomplish from the out set. We seized vehicles, seized excavators, seized water pumping machines and we seized other valuable equipment..but you notoriously kept the booty, ostensibly to enrich yourself.

Thank goodness, the police have busted the 'artful dodger.' They smoked him out of his pigeon hole yesterday, amid interrogations, I learned.

I say "Ayekoo' for acting like biblical Saul.
What did he do? He spared Agag (the Amelikite king), spared the best sheep, the best cattle and spared the fatling.

"Does the Lord delight in burnt offerings and sacrifice..?" Samuel asked Saul.

Today, I ask you: Didn't your boss direct you to cart the seized equipment to designated areas for safe keeping? Why then did you send an unknown number of equipment to unauthorised location?

Horace, you remind me of a former sports minister (another crook) of course, who told Ghanaians that some significant amount of money in his suitcase mysteriously disappeared during transit.

Per what you've done, I think you'd go down in history as one of the most dishonest individual in central region. You've betrayed and disgraced Cape Coasters. You've not only disappointed the Elephant family but also disgraced yourself for being disobedient, dishonest and disloyal to the governing NPP.

Would this arrest deter others?
Well, I know for sure Horace won't be the first nor the last to be baptised in this Lake of Shame. Sooner than later, the greed and the vampire would receive the baptism fire here.

So, "Bome Nkomor" (tell me).How'd you not know that excavators bleat and walls have ears? And what in the world was going through your mind: Did you really think you'd out-smart everyone including your hirer?

I guess you believed you could gather your booty in haste, hide them in the most secretive bunker, sell them quickly and you'll never get caught. Really?

Now that you are in the grips of the police, I won't ask you what went wrong. Because I already know your answer. The Devil or Satan, you'd say. Of course, Satan get blamed for our wrongdoings and our own iniquities.

Fighting illegal mining operation
Very often the focus has been on the downtrodders, the hungry and the unemployed youth who are trying to make ends meet and not the 'affluenza' or the influential in society. Key players in this game are politicians and chiefs. It's an open secret.

One Environmentalist during a group discussion on the subject recently remarked:

several times that currently, those leading galamsey are the ruling party guys. That it’s their turn since they claimed that they were denied access to sites under the NDC."

The Impact
He also had this to say regarding the effects of illegal mining and how itd devastatingly dealt with people that were close to him:

"What saddens me is the impact on individuals who are involved. The colossal impact - young men dying too early. All my friends who went into galamsey are dead and gone!

Is this sheer coincidence, no," he quipped.
The Horace Saga
The New Patriotic Party (NPP)’s Central Regional Vice Chairman, Horace Ekow Ewusi, was on Monday arrested by the Criminal Investigations Department (CID).

He was reported to have been undergoing interrogations at the CID Headquarters in Accra over his role in some missing excavators and other equipment seized from illegal mining operators recently.

His arrest followed a request made by the Minister of Environment, Science & Technology, Professor Frimpong Boateng.

Mr. EKow Ewusi had been contracted to cart excavators, some vehicles and other equipment seized from illegal mining operators but ended up diverting them, according to the report.

"Mr Ekow Ewusi was contracted to cart excavators and other vehicles and pieces of equipment seized by Operation Vanguard to designated areas for safe keeping," stated the letter.

The letter continued, the ministry had received information that he [Mr. Ewusi] sent an unknown number of equipment to unauthorized location including one in Tema, requesting the CID boss to investigate Mr Ewusi.

According to reports the investigation team visited Tema Community One, (at a new Washing Bay), where it was understood he'd sent some 34 excavators but only one dysfunctional excavator was sighted there.

Preliminary investigations also revealed that Mr Ewusi’s signature authorised the release of all the equipment and excavators from their authorised locations.

Meanwhile, many have hailed the arrest of the troubled NPP regional vice chair and many more are calling for a more punitive action against him to serve as a deterrent.

We must tackle poverty as national security threat – Parliam...
28 minutes ago