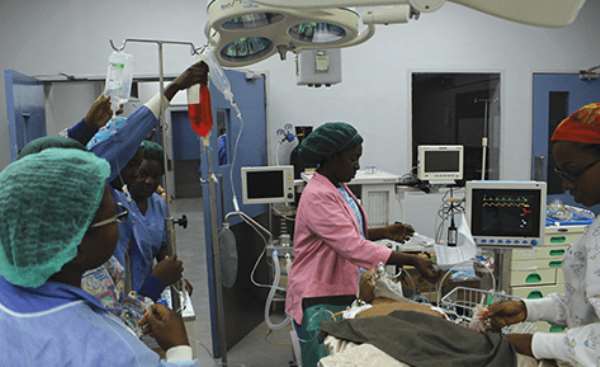 The Ghana Association of Certified Registered Anesthetists has called on government and all other relevant stakeholders to find lasting solutions to their problem as soon as possible in order to stop their impending strike.

The group laid down their tools on Friday, January 31, 2020 to, among other things, protest the refusal of the Medical and Dental Council to rescind its decision to change the group's name to Physician Assistants.

Responding to a question on when they will call off the strike on Eyewitness News, the General Secretary of the group, Frederick Kpoha, said until they are called into a meeting for a solution to their grievances, the strike will stand.

“We are just pleading that the stakeholders will quickly call us to the table for discussions. We want changes to a lot of things and not just our names. We've been left behind for far too long.” Background

The Certified Registered Anesthetists have, over time, complained about various things, including the move of the Mental and Dental Council to change their name.

Several petitions to the Council and threats to lay down their tools have been made to no avail.

“We petitioned the MDC in a letter dated 2nd October 2018 for which a copy was submitted to the office of the Health Minister during the discussion stage of the harmonization of the curriculum for training. An acknowledgement of the said letter has not been received by the MDC. The MDC has gone ahead to direct the various training schools to implement the proposed curriculum to award Bsc Physician Assistant-Anaesthesia, instead of the BSc. Anaesthesia,” the PRO for the anesthetists Seth Mc-Andoh said.

The Association also says that the Medical and Dental Council's approach of introducing a new curriculum for their training in a bid to change the already existing Bachelor of Science Anesthesia to Bachelor of Science Physician Assistants is a clear violation of the Health Professions Regulatory Bodies Act 857 (Act 2013).